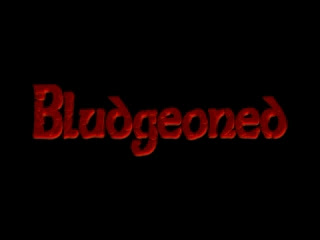 Hardly seen or heard, this possible StickyRed exclusive is about a boy, his hero, and a book.

Rick Carpenter is a high schooler with an obsession for violence unlike many; while some outcasts retreat to their violent fantasies via movies or video games, Rick finds comfort in expressing his darkest dreams through writing, inspired by his single most favorite book, Thor's Exit.

His passion for the book leads him to attend the author-turned-creative writing teacher Michael Christman's class, but Rick's disappointed when he finds out his "hero" cared very little for the book. This breaks him into picturing the book's titular anti-hero, Thor (or as the villain prefers to be called, "Maluch") to appear whenever Rick dreams, further fueling his already deranged state. As his days become harder and more grueling, Rick contemplates further if life is really nothing more but a dream and that he himself has the power to be whatever he wants to be or do. Like kill.

With a story like this, it's less of a slasher movie and more of an angst-filled coming-of-age drama; while the horror elements are ever present, they're mostly dreams and visions that are in Rick's head and much of it seems to be building up to something powerful and violent. Because of this, majority of the play time have us watching one disturbed kid go through life in his eyes, which is really no more than random tidbits of events, few of the good and plenty of the bad.

It works in a level as the acting around its casts is pretty decent for a low-budget thriller and the development of Rick's psychosis did kept me glued to see how bad will he end up once he grabs that hammer.

Unfortunately, this is where Bludgeoned disappoints; for a movie that focuses on a young adult's sick dreams of becoming a homicidal madman, the big payoff felt like more should have been done for it. We did have some deserving victims falling to Rick's madness, true, but these attacks and murders were packed in the last act of the story, meaning very little was done and more deserving candidates for his bludgeoning were left alone in an open ending. While we all can assume he had gone to finish them at the end of the movie, it wouldn't hurt to have a few more crushed skulls and broken bones presented for us on camera seeing that the film was being marketed as a horror flick. Then again, it could just be me.

I'm not going to lie, though I enjoyed watching this as an intrigued character study, I can't recommend it to just anyone as I can tell this is for a selected taste. I would go and even say May (2002) is a better candidate to satisfy your teen drama-thriller-horror cravings but if you love obscurities with some potential watchability, give Bludgeoned (or No Tomorrow as it is called in some release) a go. That is if you can find it.