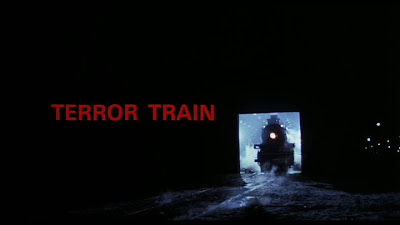 It was one New Years Eve in the 80s when Kenny, the shy guy on campus, got coaxed by his fellow freshmen to score one with Alana, Jamie Lee Curtis' good girl character in this plot. Convinced that he is finally gonna get lucky with the girl of his dreams, Kenny followed his friends' instruction to meet her in a chiffon covered room, unaware of their real intention; on the bed was an obscured cadaver taken out from a nearby mortuary, and Alana -hiding behind a four poster bed- unknowingly agreed to tease Kenny by inviting him to strip and make out with "her".

When Kenny finds out exactly what he was snuggling with, it's no surprise he completely lost it, leading to one hell of a guilt trip on Alana's behalf that lasts three long years until the night of their graduation.

On that snowy present evening, the graduating class celebrates their last band together aboard a chartered train, donning costumes and hiring a REAL magician (the one and only David Copperfield, who apparently hates this film for some odd reason...) for entertainment. Those who were responsible of the prank try to move on from the fact that their little stunt caused a mental breakdown, but it appears the past found a way to pay them back; unknowingly to all of them, Kenny is in the train and has a bone to pick with the pricks (and Alana) as, one by one, he murders them and dons their costume to get around unnoticed.

When it soon narrows down to just him and Alana, deadly chases and twisted twists are not far from the expected, seeing this is released during the bygone years of the 80s slasher boom. And yet, you can tell Terror Train is in a league of its own.

While it is a slasher, bloody kills isn't the winning factor for Terror Train but rather its creepiness, sadistic streak, and a bit of ingenuity; it is brutal without being overly bloody, raising up a few creative carnage as the killer walks among potential victims unnoticed and play with the idea that everyone is donning costumes, meaning he can murder anyone without alarming the entire party. (That is until said victim's friend takes notice, then it's pandemonium!) It seems pretty obvious that the killer wanted all those responsible for the prank that ruined his life to emotionally and psychologically suffer first before grabbing them by the throat, even more when he chases Jamie Lee's character through an abandoned corridor during the film's climax, at one point mocking her by smearing blood all over her face and then teasing her with an axe as he corners her in a cage.

What's more impressive is how well the claustrophobic feel work in this film, seemingly thanks to an atmospheric cinematography and some darn-good performances from its casts despite the trace of cheese. As of any 80s slasher, it still does the classic cliches, minus T&A, (unless you count the corpse...you freak of nature) but the only real let down was, after a few unnoticed killings, the movie slows down in the middle and went to stab at teen politics and a bit of the blame game; not overly bad, just simply dragging since the film did have a good start and all the killer do at this point of this movie was skulk and glare. Again, this is a minor gripe, and things did got going once more after the thespians discover the murders.

Terror Train makes its way to an end with a lot of cheesiness, whether this is funny, creative or plain crazy is up to you. Personally, if it wasn't for the slow middle bit, this fine Canadian slasher may have been finer but it could have done worse (so much worse) and I am just thankful that the overall result was as fun and exciting as it was grueling and mean. If you have enough patience to go through teens being teens and some vintage magic show just for some worthy cat-and-mouse killer antics, then seek out this masterpiece!

Bodycount:
1 male found ran through with a sword, crushed underneath a train
1 male brained against a mirror
1 female found with throat cut
1 male found stabbed
2 males mentioned missing
1 male decapitated
1 male found impaled with swords
1 male falls to his death unto a frozen lake
Total: 10
Posted by Kaijinu at 3:14 PM