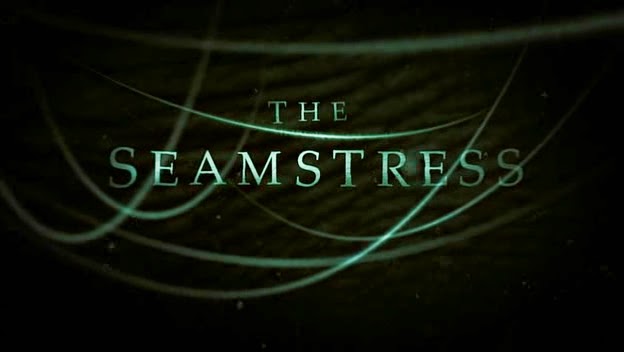 Take everything you know about backwoods slasher/monster features (as in teens in the woods having sex for fun dying one by one), put in a floaty J-Horror-like ghost with needles for fingertips as our villain, and one uninteresting mystery involving a teen girl looking for answers to why her dad suddenly changed his personality before disappearing in said woods (obvious answer, he's involved some way with the villain's current supernatural state) and you get The Seamstress, a rather uninspired mess that tries to do an effort to create a possible new face of horror but fails to.

Why? Characterization, flow and plot. The casts aren't exactly terrible, but the characters they play are as flat as flapjacks and barely stands out in anyway except that a couple here's newly engaged and another has some sort of tired love-triangle with the main gal. Our protagonist, even, is laughable in her current semi-depressed state; played by Kailin See from Decoys 2: The Second Seduction (2007), she shows that she really means business in her mystery-solving hoo-ha by readily accusing and yelling at one of the townfolks who last saw her dad, calling him a murderer the moment she saw him. Yeah, so much for rooting for our heroes.

To salt our wounds, the movie runs for 76 minutes but it took about 45 before they get the action going. In media res, we are treated to witness an "offscreen" torture session with the town's local sheriff as he mutilates a possible vigilante who, like Kailin See's character's father, may have something to do with The Seamstress. And with her being said, this monster isn't even all that terrifying, intriguing or even memorable. She comes out being an amalgamation of the Tooth Fairy from Darkness Falls (2003) and Sadako Yamamura/Samara Morgan from The Ring series, with a whispery voice and armed with needles which she uses to sew people's eyes shut as well as a stabbing weapon (I'm aware how small it is but she made it work), but has the unfortunate luck of having an origin story-slash-motive that's really worn out for our standards. (And yet the script tries to make it look like as if this is all new and unique.)

The end result is a tirade of tired backwoods shenanigans and vengeful ghost cliches. No cast to care for, no villain to root for and definitely no twists to shock us. Production has some quality but the flashy editing and CG effects shows how much was spent and judging from what I've seen, not enough to make The Seamstress work at all.