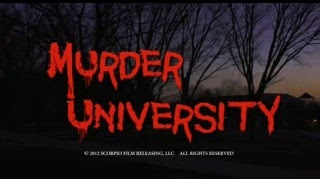 Some of the box art for this film shows a rather grim and serious shot of a victim cowering before somebody with an axe; little do some suckers know that, though there is a maniac with an axe (actually, three maniacs!), Murder University is anything but serious and grim, that is until the final half hour.

Taking place in a fictional Greensboro College in 1983, Josh is a freshman who just couldn't fit in with the weird and hokey people around campus, probably because he's the son of somebody with a bit of history there. All things go for the worse when he gets captured by a trio of masked cult murderers and witnessed some slayings.
Josh survives the ordeal, escapes and is forced to team-up with a detective who's on this case for quite some time now and, too, his daughter who obviously took quite a liking to Josh the moment they met. As the kill count rises to double digits, it's only a matter of time before this trio of unlikely company finds the truth behind these killings, with a twist that comes rather offbeat and dark.

Murder University resembles a Troma movie minus the crude gross-outs and more on the weird; Jamie DuFault's character Josh may as well be the only normal guy around and he's getting into a lot of trouble just for being one. His roommate's a dorky looking ladiesman who wears "I'm a Virgin" shirts and works in stripper bars, his professor profanes as a part of his teaching regime, and we all can't help but feel that every student and staff in this university are out to get our lead guy, even if some of them were meant to help him. More or less, the lack of any serious character here did kinda help us root for our lead as he is the only one with some real sense around, which also makes the sudden grim turn in the last third of the movie quite effective.

In fact, while I'm not too keen with the kind of humor Murder University's approaching, I love the fact they kept the slasher/horror elements as straight as possible, even delving into the thrill once in a while thanks to the healthy helping of chase scenes. The kills are sort of repetitive, unfortunately, limited to a series of axe hackings and beheading, with only a slight chance for the killers to get creative and pick something else as a murder weapon. (and when they did, it disappointingly shown as a black and white video shown to taunt our leads) Still, the lack of CG in these murders is a nice touch, staying true to the 80s heydays that this movie is taking tribute to.

Then there's the technical aspects; camerawork and lighting has this giallo-esque take with candy tinting and editing done away with grained details. It's picturesque and fitting to the supposed decade the story takes place in, remarkable seeing how fair the budget was.

But what really impressed me about Murder University is its unpredictability; right in the beginning we're treated to something we didn't quite see coming from your classic a group of opening victims and these unusual twists venture further into the movie as unexpected character deaths and changes swarmed crucial moments with enough shock factor to keep this low-budget gem memorable in its best.

May it fail to provide a workable comedy element, the movie still have a fair amount of pros to at least make a satisfying viewing. It could have been worthier should the directing kept the entire thing a "straight" 80s slasher tribute but, as even the dumbest flick out there would have their own following, Murder University will definitely have its own.