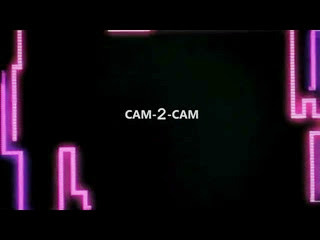 Slasher movies involving cyberspace are not the likeliest bunch to really work out there. At least, not without getting some criticisms on their attempt to mix our modern social elements with something as cliched as bodycount horror films.

Still, sometimes it's all in the delivery: CRY_WOLF (what could be considered as the earliest example of these films) has a watchable direction despite its lack of real sizable killcount, 2009's Chain Letter got the gore going in favor over a cheesy plot, and perhaps 2013's The Den might be the only title to make this slasher variation creepier than it should be! But of course, with the likes of others like Smiley (2012) and iMurders, there will always be flawed ones and Cam2Cam sadly falls in with these clutter.

Taking place in Thailand, we begin with a lengthy scenario involving a woman, alone in her cheap apartment, playing tease with another woman at a video chat site. What started as a kinky play soon escalates to a vulgar and creepy conversation, and it's a tad too late to back out now as our girl notices her chatmate was stripping while the message was being typed and whoever it was on the other side of the site knew what she is doing. (Think the opening for Scream, with less star power and more cybertalk)

The woman's geeky-looking neighbor shows up, supposedly checking on her until he reveals that all of this is his doing, viciously beheading her after a lengthy monologue about how he's tired of being treated as shit by women.

A few weeks later, we now follow Allie (Pretty Little Liar's Tammin Sursok), a visiting student who wanted to party hard in Thailand while she takes a year off campus. She finds a place to stay in a dirty looking apartment complex and she befriends a group of highly accented English-speaking foreigners who, after some night of partying, introduces her Cam2Cam, a paysite where people can buy time to watch other people do the sickest and the most bizarre sexual deviancy over the web.

Note, the apartments and the site were the same ones from the opening kill so if this is to say anything, we can easily tell these kids may have something to do with the murder but just about half an hour into the movie, our killer suddenly kills himself by jumping unto an incoming truck, thus thickening our plot into something unexpected.

The problem with Cam2Cam was, after the killer commits suicide, it all went downhill: with little to no characters to care for thanks to the bland development of both the story and cast. The movie turns into a chore of a watch where the twists can be seen from a mile afar and a lack of atmosphere just made it dull to the very bone. The sadder part was that this tile felt like it never reached at least half of its full potential, with the lack of blood making it too dry for a slasher fanatic, the twists are too obvious and messy for mystery fans, and the scares too cliched to impress a horror junkie.

Honestly, the only thing that worked here was the opening, even if we can easily tell that the scenario smelled trouble the moment we notice the supposed live feed looping and the chats type themselves. All the goodness of a slasher thriller was molded on that first fifteen minutes alone and soon to be exploited uselessly for the next hour (yes, this film's running time was a short one. Felt longer, though.)

I can also see this is trying to capture the dark and grimey underworld of Asia (which is always ugly no matter how you look at it. I should know, I live in one!) but the exploitation angle limps uncomfortably if this is the only support the producers were aiming for to rally up the rest of the movie. You ought to think I should be used to this kind of trash by now but let me tell you this: there's redeemable trash and then there's utter garbage. Cam2Cam's overflowing flaws that outnumbered the good threw it straight into the garbage heap.

Obviously, I'm not too impressed. I'll subject myself to the dreaded Chain Letter and/or Smiley over this anytime.