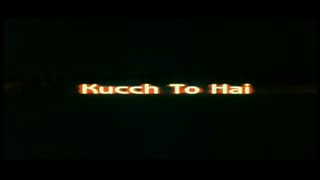 As far as I can tell, when watching a Bollywood horror, one should expect cheese, shot-by-shot ripping, lengthy running times and countless musical numbers. (and I mean Countless musical numbers) I already have my share of Indian shot horror flicks including the infamous Indian "remake" of A Nightmare on Elm Street known as Mahakaal (1990), the not-so-remake-but-otherwise-ripped-off A Nightmare on Elm Street rendition known as Khooni Murda (1989), as well as the mildly entertaining but awfully cheap Jeepers Creepers 2/Tremors hybrid Kaalo (2010). (The latter being my first Bollywoods slasher and incidentally the only one I've seen so far that didn't include a musical number)

Now, as you read this review, I'm about to take a dip into that cheese again. This time, I Know What You Did Last Summer style with a dash of bad romantic teen comedy!

Told as a flashback by two ex-lovers while on board to New Delhi, it was the time of  blossoming romance as these two recall their last years as carefree and partying students. Karan was smitten by the new freshman Tanya and was trying his best to win her heart by doing lots of cheesy romance clichés as possible in traditional Bollywood manner. (Meaning lots of dance montages from these two or just one of them being lovey-dovey. Bleh)

It takes around an hour before we get our first horror scene, involving a random geek being stalked in a very empty dorm (thanks to everyone attending a 70s-themed prom that night) and ends up murdered by a cool looking hoodie killer with a sharp kukri. (or curved machete in laymen's terms) But being a random character, this guy's death was dismissed as suicide and it wasn't until a half hour or so before we finally get a real plot development, wherein Tanya was caught cheating on her exam and gets dismissed from the test.

Hoping to impress her, Karan devised a plan with their friends to steal Tanya's papers that night and forge a passing grade. Things went from bad to worse fast when Bakshi, the professor keeping the tests and a suspected killer, caught them breaking into his home and pursued them to the point they actually discover the professor's dead wife. Frightened, the group made a run for their jeep and accidentally hit their professor; kids began shouting, random dude comes and accuses them of doing something illegal (but leaves anyways) and it turns out that Bakshi wasn't really dead but wounded enough to stagger and fall into a nearby cliff. Clearly, if you have seen I know what you did Last Summer as much as any veteran slasher fan does, you know where this is going...

Fast forward to three years later, after Tanya and Karan ended their relationship, Karan is now engaged to his childhood friend Natasha and called in their friends to a remote snowy inn to celebrate. However, it appears that someone donning the same hoodie coat professor Bakshi was wearing have plans to murder them one by one. Could it be that Bakshi survived his fall and is now hellbent on revenge? Or is there somebody else involved in this killing spree?

Not much to say with this one save that I believe the only group of people who can really appreciate this movie is those who live for the cheese and only cheese. The acting is weak in general and I find it hard relating to anyone here; if it's anything, it's normally this kind of weak acting that can be made up with some excellent kills but even that hardly made a dent since the murders were barely bloody, miniscule in count and obscured by cheap quick-cuts. Add a colossal amount of false scares and padding, and all sense of decency as a slasher film were flushed down the toilet.

To be fair, the film has an impressive looking production from big-budget looking set-pieces to well-made cinematography. Some horror scenes did stood up, especially the incredibly tense aforementioned first murder and one cheesy scene involving the killer burying themselves under the thick snow and unearthing to get a close kill. ( How they figured out that the victim will stagger precisely on that location beforehand, or the fact that they actually survived that long while wearing a parka hood-full of snow over their face without freezing to death is beyond me), but apart from that everything else was forgettable.

Horror isn't really this movie's strong point, not with all the dancing, singing and corny love montages, but at least its interesting enough to keep me watching for nearly 3 hours, despite already knowing some of the twists and turns. Nothing else noteworthy here but if you love corny romance stories with a fair amount of scares (not to mention patience), then this Bollywood rip is yours to find. Also, it would probably help if you hadn't seen IKWYDLS or Urban Legend yet, but that would really question your credibility as a horror fan and your place in this blog...