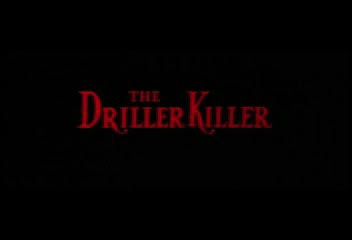 Reno is an artist with problems; not only is he scraping for cash, but he's also repeatedly berated by his girlfriend and their lesbian roomie for cash and dope. To make matters worse, a band called The Rooster moved in to one of the neighboring apartments and their jam-out sessions are a big distraction for Reno from finishing his big commission work for an art collector who's willing to pay big.

Stressed beyond sanity, Reno eventually breaks out of his demeanor and goes through a nightly killing spree targeting homeless people with his battery pack-powered powerdrill, avoiding capture in each attack. And the more he went on with his daily life and newfound "hobby", the deeper and more personal he goes with his massacres. It isn't too long now before he's pushed further beyond the edge and killing vagrants won't be enough to satisfy his bloodlust anymore...

The Driller Killer is less of an actual slasher film as it focuses more on the titular character in his lowest, putting the film more in place with psycho-thrillers, as a precursor to movies like Maniac (1980) and Henry: Portrait of a Serial Killer but with the level of savagery from the killings far from restrained and features a bodycount as heavy as it can, gaining recognition among slasher fans.

It's a dirty movie in its coating, but underlying this seemingly nihilistic approach to the world, the film is a lot deeper than a mere a psycho with a powertool exploitation plot. As far as the flow is concerned for that case, the movie is as unsettling to follow as everything about it seems to be synced with Reno's gritty and alienated lifestyle. (made more effective with the film's low-budget and overall grindhouse feel) Hot flashes of violence and other disturbing visions work their way through the scenes while we watch our lead killer loses sanity from one moment to the next, paced to test our patience with this character as he boils down, fed up from the imperfections he has to lived with (a vagrant father, poverty and a dissatisfied girlfriend, just to name a few) and just decides to deal with the matter the only way he can, and apparently it involves a powerdrill.

However, as deep as The Driller Killer tries to fuse splatter film elements with  talks of social commentary, this doesn't hide the fact how cheap and raw the direction of the movie is. Unnecessarily drawn-out scenes are a common complain coming from this movie, and add the matter that the film's dialogue is anything but clear, it's not hard to imagine why some viewers would have a hard time trying to enjoy it. Still, it's a half-and-half workable movie, and it does have a sizable fan base, so I guess the gritty semi-realism this film has did its job to unnerve and distraught people.

While not entirely the best Video Nasty to be included in the list, it certainly proved its worth. marketing of this film alone was controversial enough as upon its video release, its front cover features an edited screencap of one of the movie's nastier killings, much to the shock of angry mothers and religious zealots who fear the image was too extreme for the public. Well, personally it is, but it IS a horror movie so I don't usually expect cute lil' pegasus dancing in front of the cover.
All in all, a worthy viewing for fans of gore, grit or anyone who just had a thing for red-stained powertools.