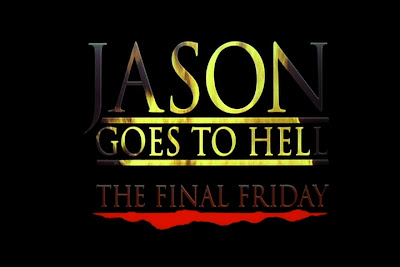 I can't hate this. Not even if I try. The film has great sentimental value for me as this is one of the first few DVDs I came to own during the ending years of my Grade School. I was and always will be Jason's fan boy and I find this little number, despite the lack of an actual Jason (mask, machete and all), as one of the wackiest, cheesiest and entertainingly mind-numbing entry to the iconic film series.

Some time after he ravaged Manhattan and seemingly melting away thanks to a conveniently present toxic waste flood (yes, apparently New York's underground sewage is filled with them), the hulking killer known as Jason Voorhees somehow survived this, made his way back to Crystal Lake and is about to embark on another night of machete mayhem, stalking a towel-clad victim in the middle of the woods. Just when we thought we'll have another girl cornered by the big guy, she gives a quick signal and an entire swat team suddenly shows up, raining lead on Jason before blowing him up with a grenade. (or a Rocket Launcher. I dunno, the explosion looked too strong to be just a grenade)

Believing that the Camp Crystal Lake slasher is finally resting in pieces, the team picks up whatever charred remains they can grab a handful off, leading us to a quite lengthy opening sequence involving a coroner playing around with Jason's chunky and horribly disfigured organs. It's all casual standard procedures until Jason's heart begins to pump on its own, hypnotizing the coroner into eating it (I still don't get how? Or why?) and somehow allowing Jason's spirit (or spirits. Why was there so many floaty, ghostly lights coming out of Jason's body to begin with?!) to possess the man and embark on another murderous rampage.

With all the murders leading to Crystal Lake, it questions the credibility of Jason's death; a prime time news report even has a special involving this controversy, which includes an interview with one infamous bounty hunter known as Creighton Duke, who somehow knows a lot about our killer and is seemingly aware on how non-human he is to begin with. He vows to bring Jason back to where he belongs, in exchange for a hefty sum of cash.

Back in Crystal Lake, a local diner is celebrating Jason's death with a two-for-one burger deal (with hockey mask shaped patties and French fries dubbed as "Jason Fingers"); Diana, a waitress there, seems to be troubled by the fact that these killings are happening again but she has bigger things to deal with as, apart from living a mediocre job, she's also trying to bring peace between her daughter, Jessica, and her ex-boyfriend Steven. Just as things couldn't get any worse for her, she also encounters Duke, who's looking for her specifically just for the job he needs to do. After a small ruffle in the diner, Duke is arrested for disturbing the peace and Diana tells Steven to meet up with her later that night, as she has something important to tell him.

Unfortunately, that night is also the time we come to learn that Jason (or his soul) has to jump from one body to the next (as the ones he possesses doesn't last too long and they melt, apparently), eventually killing his way to Diana's house and murders her, leaving a visiting Steven to blame.

At his arrest, Steven had the luck to talk to Duke, who was more than willing (or, rather, for a price of breaking a couple of fingers) to share what he knows: apparently, Jason's ability to jump from one flesh bag to another has a fail safe. Just in case he's to lose his body to the point that he can't even regenerate, he has the alternative to possess a bloodline and use that body to regain his. (clothes and mask are apparently included in the package deal) In a convenient, shark-jumping franchise twist, Jason has a half-sister: Diana! So with her dead, that only leaves Jessica and her own daughter, Stephanie (the secret Diana was supposed to share with Steven), in Jason's main hit list. With that, the young father is forced to risk his own life to save his family and face a threat that seems to have no end.

Jason Goes to Hell is the result of the Box Office failure of Paramount's last Friday film "Jason Takes Manhattan". With the combination of a misleading title, numerous continuity errors, plot holes, and Jason's sudden ability to teleport and talk like a little boy, the Paramount film flopped, thus forcing the company to turn over the rights of Jason's further franchising to New Line cinema. (AKA, the home of Freddy Krueger!) Supposedly, this was yet again another attempt to end the franchise but for God knows what reason, the series survived despite the mixed reactions from loyal Friday the 13th fans and eventually builds up to the epic slasher smack down that would be known as Freddy vs Jason, something both Paramount and New Line were planning since the late 1980s.

But prior to us discovering what makes Jason tick through the dream world, Jason Goes to Hell draws out some of its own new mythology on Jason to make the film as "unique" as possible, which ultimately leads to a hodge podge of horror movie ideas that doesn't feel quite fitting to a Friday film.

From Demonic possessions and magical relics, to "melt movies" and even riffing that famous massacre scene from The Terminator (and let's not forget some strange "cameos" of familiar looking items in the backgrounds. Necronomicon Ex Mortis anyone? How about Fluffy's Crate from Creepshow (1982)?), it's one crazy idea piling up after the other to the point that you almost forget that the film's was supposed to be about a big zombified killer in a Hockey mask murdering teens. Interestingly, the focus on teenagers here is almost absent as adults are placed in as victims and the only time we get to see teens being turned into mincemeat was during that one random and gratuitous scene where three hitchhiking kids got some trysting action - perhaps the only real sex scene this series has to offer until the 2009 remake - inevitably leading to Jason killing them in full gory display. Because of this, the story is more character driven and a lot more developed in ways that you never expected.

But, as any other Friday the 13th movie, Jason Goes to Hell never failed to deliver the bodycount; gore is glorious as ever with the film's pure brutality taking the spotlight. Messy kills such as full body splittings and people being smashed to walls, and too some very obscure overkills (one guy gets stabbed on the head with a probe against a grated table with enough force to slice his face, while another gets impaled on a steel rod and gets their skull squished like a melon just to name a few) are just some of the few pulpy murders our effects team were so willing to give us and another reason to love and forgive this film for its sins.

I also find the film's overly cheesy direction to be as equally fun as the bodycounting, giving the movie some bit of humor amidst the killings. (though the funnier ones present in the film's deleted scenes and alternative TV release. There's an exchange between Steven and his cop friend about being pointed at with your own gun that I find really hilarious!) I also love the final fight in this movie, where average joe Steven grapples with the fully revived yet still undead Jason, mano-a-monster, leading to one of the most epic Jason "death" I've seen in the franchise.

While obviously not the last film in the series, I find Jason Goes to Hell one heck of a screwed-up momentary last ride for Mr. Voorhees and loved every minute of it. It's not the best film in the series but it certainly made an impression for itself and I'm pretty damn proud of seeing it. While it might have taken another few years for him to come back in his full, hockey-masked glory to kill horny teenagers as he's supposed to (and another couple of years before he finally grapples with our dream menace, Freddy Krueger), at least it's safe to say Jason's new home (New Lines cinema, not Hell!) knew how to get our attention and entertain us in the most outrageous way!

Bodycount:
1 male gets an autopsy probe to the head, face grated
2 males bludgeoned to death offcamera
1 female slashed to death with scalpel
1 female split in half with rain spike
1 male had his head smashed offcamera
1 female had her head crushed with car door
1 male presumably melted
1 female gets a thrown knife sharpener to the back
1 male melts
1 female had her face crushed
2 males gets their heads bashed together
1 male had an arm broken, thrown dead against diner door
1 male accidentally shot with shotgun
1 male dunked head-first to a deep fryer, burnt
1 female gets her lower jaw bashed in
1 female impaled on barbecue skewer, head crushed open
1 male presumably melted offcamera
1 male stabbed on the gut with dagger
1 male nearly decapitated with machete
1 male had his back broken with bear hug
Total: 22 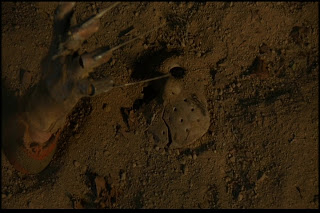