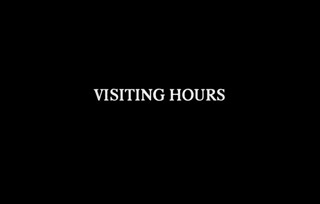 Slasher films were made infamous with the claim of them being misogynistic due to the number of nubile and sexually active women being "punished" for being so, well, sexually active, as well as the claims that their deaths doesn't come in quick and are often glamorized. Movies like John Carpenter's Halloween and William Lustig's Maniac have shown this by having their killers stressfully stalk their victims before dispatching them in a brutal manner, and more often than not these victims engaged in premarital sex.

80s slashers definitely have their hands full working around these notions to the public but that doesn't stop them from tackling the subject, one way or another. Take Visiting Hours here for example; among all slashers and Video Nasties I've seen, the film was one of the few that took on Misogyny in a rather more focused light and shows one woman's belief for it challenged by a very hateful maniac.

Coming home from an evening talk show where she expressed her distraught for victimized women everywhere, Deborah is a strong feminist who soon finds her home invaded by Colt Hawker, a creeper donning multiple body piercings, hellbent on killing women like her. (A childhood hatred grown into him after seeing his mum disfigure his dad with boiling water)

After a long struggle, Deborah survives her injuries long enough until help comes, forcing the intruder to flee and patiently stalk her around the hospital later, intending to finish what he started. However, things take a distracting turn when he also begins creeping into the household of one Shiela, a nurse Deborah befriends who, in turn, made a personal response to Deborah's attacker. Sidetracked by this, the psychopath takes his time to torment both women, in a mad mission to punish them for being strong.

Deep as it is, Visiting Hours certainly took a wild jab at the slasher formula and created something rather controversial and infamously unique for the sub-genre. While we do have movies that focused on misogyny such as Lucio Fulci's really depressing giallo/horror The New York Ripper, and too the aforementioned Maniac, Visiting Hours was done different by focusing on the victims's struggles and how the psychopath sees them, rather than exploiting it with cheap messy gore and momentous amount of cheese. As far as I can tell, Visiting Hours took the stab quite seriously, giving us a rather disagreeable fellow as a villain whose pure short-sighted hatred for women and his determination to kill one is as frightening as his ability to put on different disguises to avoid suspicion (a cheesy plot point for us to sit through) and apparent cold disregard for anybody else who got in the way. One very memorable scene, he mistakenly cuts off the respirator of one poor elderly woman after believing he's in his intended victim's room; wherein even after realizing his mistake, he simply just watches the old nameless woman die in a desperate attempt to breath. Real squeamish stuff.

Unfortunately, because of this "determination", Visiting Hours really took its time to flesh out its killer's attacks as the film's direction had him splitting his attention to two women. I actually find this idea quite interesting, but it did dragged the film to a bit of a snail's pace and a running time of nearly two hours. Fortunately, the stalks and attacks come in as brutal and nail-bitingly tense as they come, so I didn't mind the pace and I can easily overlook a running time so long as the premises is an interesting one.

The biggest positive I can see from this film here is that how it actually pits our two leads against the killer; there's a sense of realism to these attacks, a mirror to some of the more heinous acts of intolerance that exists even until today. The women here are no more than hard-working class doing their best to defend their rights as an individual and to berate them for believing this is just awfully nasty yet true even to this day and age. In fact, it was hinted that the Hawker character have not only bigoted his way against women, but also Jews, Hispanics and even Blacks, making him one of the nastier villains to come out from this sub-genre and more the reason for us to root for the leads to survive. For this, I have to give kudos to our main three leads, Michael Ironside (of the Scanner's fame), Lee Grant as Deborah and Linda Purl as Sheila.

While it isn't a slasher in its purest form, it incorporated the slice-and-dice formula with what I can call as a forerunner to the 90s "yuppies-in-terror" thrillers, making Visiting Hours pretty entertaining for most of the run, though I say "most" since those who are looking for an enormous bodycounting will the disappointed for the rather miniature count (I can assume six. I could include some of them but I'm pretty sure anyone can survive being pushed through an office window), all of them plainly involving people who just happens to be in the wrong place at the wrong time. Either way, I won't say that this is one of the most perfect slashers to be released in the 80s but it certainly one of the gutsier and, dare I say, "unique" titles fanatics should at least give a try. Not everyone's gonna get it nor will they appreciate the attempt to do something altogether different, but I enjoyed it, Lengthy running time and all!