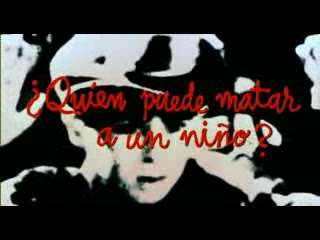 Who Can Kill a Child?/¿Quién puede matar a un niño? (Spain, 1976) (AKA "Island of the Damned", "Death is Child's Play", "The Hex Massacre", "The Killer's Playground", "Trapped", "Would You Kill a Child?")
Rating: ***
Starring:  Lewis Fiander, Prunella Ransome, Antonio Iranzo

I may have been expecting a lot from this, but I honestly find Who Can Kill A Child? as a workable yet unnecessarily draggy chiller where all the violence happened off-camera, the villains are anomalously freaky, and gripping tension is all that matters. I guess, being someone who have seen all Children of the Corn movies, it's kinda hard to break a mindset that every "killer child" movie has to be at least modeled after slasher movies (Except, of course the original Bad Seed and The Omen. Those are special exceptions for me), so some elements of this film didn't work out for me.

In here, an English couple is touring an isolated island over the Southern Spanish coast, only to find the place completely barren of adults and littered with grinning children. After looking around, it soon becomes clear to them that the children have murdered all the of the adults, leaving the couple trapped and forced to fight for their lives.

As to why the children are doing this or what is causes them to commit murder, this was hardly explained. Instead, it's hinted at some scenes that a strange supernatural phenomenon or infection may be to blame, and the adults are left defenseless from all this since their morals and ethics are holding them back from hitting a or their child, which, honestly, is bullshit on my part (I mean, are they telling me not one or two adults in there thought  "Oh, so that's why Beware! Children at Play! ended like that!" and just fought back and at least disable the kids?) This enabled the killer kids to take advantage and pick them all off overnight, a fact that kinda killed off some credibility to this movie.

And then there is the point that the film felt like it takes forever before anything happens. I know this is for the psychological tension, but it's kinda hard to feel scared watching a movie if we spent around 45 minutes or more with the couple just looking around empty streets for someone to show up. And by the time the couple finally knows what's wrong with the children, the stalk-and-chase antics can get a bit tiring as it provide very little shock for a movie with a near two hour running time! I might be bias with this one, but for me, if you want a psychological-survival film to work, you got to provide us something that will utterly unnerve us other than long intense scene. (One scene, for example, had a pregnant woman attacked by her own unborn baby that somehow succumbs to the sickness affecting the children. The idea is sick and interesting, but it's hardly bloody and all she did there was moan and wince.)

If there is anything good to come out of this film, it would be that actors were great since all the focus was on two primary characters as any other were bumped off as soon as they're introduced. The tone of the movie is also consistent, so it's not really a bad film to begin with so to speak and I could have honestly enjoyed it as a B-flick creeper thanks to its dreary atmosphere. The kill count is high and the movie's bleak resolution had us hinting of a possible apocalypse involving evil kids, an idea that I find creepy so that's another point up.

I know around the time this movie was released, killer kids may have been considered shocking, but for our standards today, we've seen worse brats with blood on their hands. As a whole, Who Can Kill A Child? is a fair low-brow horror flick for those who loves a good mind-fuck, survivalist drama or homicidal children. 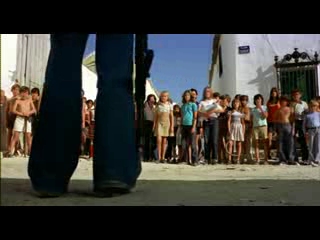 Almost 40 years have passed since the little cult fave Who Can Kill a Child terrorized audiences with uncomfortable silence and isolated backdrop. Now, some guy who calls himself Makinov figured it's high time to potentially update this little known title for the modern audience for a possible reboot. A decision that I find necessary for this title.

Unfortunately, it is as if they were afraid to mess it up, the film (uncomfortably re-titled "Come Out and Play") is nothing more than a shot-by-shot remake of the original with blood and gore. The story still revolves around an English couple visiting a South Spanish island, finding it's entire adult inhabitants have been murdered by their own children who are succumbing to a strange supernatural infection, thus turning the couple's supposed holiday tour to a fight for survival that they may not win. So with that in mind, the movie failed to make any impact on its own, unless yer not familiar with the original.
There's also a matter of the scripting and character; back then, the two lead's character might have been credible and effective, as too the movie's scripting, but in today's society, there's just something quite off about a couple not realizing the strangeness of a near-empty town with only children running around. They could at least notice that, but no. They actually put the blame on last night's Carnivale partying for an entire town's disappearance, seeing the possibility that everyone's just drunk asleep.

Yeah right, and I'm the King and Queen of Cheese...

The only thing that changed here, and I believe is for the better, is that Come Out and Play delivers the story as soon as possible and the film finally have the gore the original should have provided, in a rather quite satisfactory way if I may say so myself. (though most occurred offscreen) While Who Can Kill a Child? is a practice on fright without the use of blood and bodies, Come Out and Play showcased a bloodier set of murders including an elderly male being stabbed to death, corpses being mutilated further and a messier murder of a pregnant woman, something to at least keep up with the time in terms of shock value.

The hopeless tone of the original coinciding with this remake's blood-work somehow brought the same sense of dread and unnerving tension with all the mayhem the children are creating, just as it did on the original. Some people might call it a lack of imagination, some might call it keeping the torch burning, I for one call it living the phrase "If it ain't broken, don't fix it (too much)".

If you know little of the original 70s creeper, then this movie might just work out for you. Fans, however, of the original will be sorely disappointed on this carbon copy of a movie. (It's Psycho '98 all over again...) Still, so long as they're finally showing the bodies for me, that's all I need to keep me watching this survival thriller. Sometimes it's best not to expect too much... 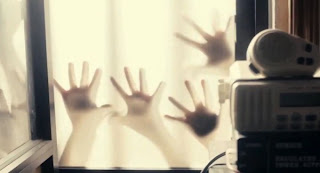