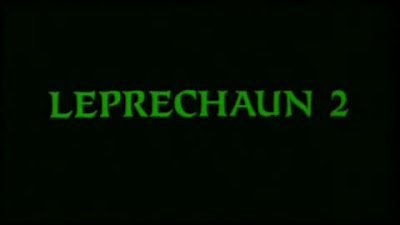 After being a minor hit in the theaters, the rambunctious tiny terror known as Leprechaun stepped into the franchising business a year later.

Giving some thought into this, you could assume that the production was rushed and would likely end up a cheesy woozit that anybody can laugh at with some boozed-up buddies. Then again, didn't the first Leprechaun was?

Once upon a time, during one St. Patrick's Day in the middle ages, an evil Leprechaun caught one of his slaves escaping. But as a sign of goodwill since that day was his birthday too, the Leprechaun decided to let the man live and tag him along with his evil plan to force one fair maiden into being his bride by making her sneeze three times. But as it turns out, said "fair maiden" is the slave's own daughter, thus forcing the man to betray his master and got himself killed in the process. All's not lost for the murderous dwarf as he plans to patiently wait for the next 1000 years to come back and try again. Why? Cuz he can. Let's leave just it at that.

So 1000 years later turned out to be 1994, and the Leprechaun returns on St. Patrick's Day to steal himself a wife, this time setting his eyes on one Bridget, a young and patient lover of this entry's hero, a horror-tour guide named Cody. As the little guy began to magically kill his way through the competition, Cody has no choice but to stop the leprechaun from entrapping his girl to a life-time of being the wife of a guy who's half their size and spat out bad one-liners! (Oh, and is homicidal. Let's not forget that part!)

But how can he when every cop is out there looking for him as he is suspected of murdering those that the Lep had killed?

Still following the traditions of a badly directed corn-puff of a movie, Leprechaun 2 is hardly a sequel that improved. In fact, I believe it's better to see this movie as a reboot of the original as it hardly mentioned the previous film and none of the mythologies from that film seems to exist here save for the Leprechaun's taste for gold. (He seems to be more fond of the shiny stuff as he'll take it from anywhere or anyone) It's all in the same level of the first, a hammy B-flick that aims to be entertain through dark humor and a doubled bodycount.

Script-wise, we got some very standard (otherwise disposable) cast and characters. Charlie Heath as Cody and Shevonne Durkin as Bridget, as much as we would like to have them survive this ordeal, it all got to some point where we hardly care if they win or not since they're so flat and uninteresting. Warwick Davis is still a devilish fun cast behind the latex, which is understandable since he is the main critter in this movie, a Godsend compared to the two thin leads we got here. He's still the big scene-stealer who's giddy to murder anyone who steps in the way, interestingly more magic oriented here with deaths by go-carts from hell and deadly illusions. You would actually expect this entry to be bloodier than the first as most sequel would, but it's quite limited with the gore, showing off simple blood splatters and cut-aways, something I had to knock off half a rating for from a possible three star. (I wasn't lying when I said it's as good as the original)
It's not anything that could wow you into accepting the Leprechaun series as an improving horror film franchise, but as far as entertainment could go, Leprechaun 2 still hits some marks so I wouldn't say it's all for nothing. Best recommended for lovers of silly B-flicks and little men in lederhosens!