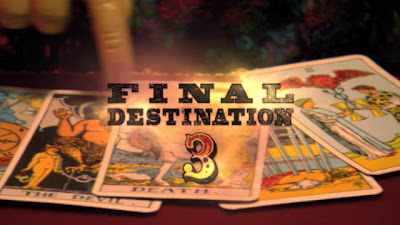 Gore, gore, and more gore; when movies like SAW, Hostel and The Devil's Rejects introduced long and torturous overkills, bighead business types probably wanted to cash-in to these movies' successes by putting the splatter back in horror and thriller cinema. Thus, the once clever and intense dead teenager series Final Destination steps its game up for its third inning to cater a new wave of gore-hungry audience, even if it meant re-telling the same plot all over again.

This time around, we join highschooler Wendy and her friends at a local fair as they celebrate their last days in McKinley High before graduating. What should have been a fun night for everyone in her year, tragedy decided to rear its ugly head when a roller-coaster accident takes the lives of some of the school's students, though there should have been more victims in the count.

Wendy, you see, had a premonition of the upcoming disaster minutes before it started, thus she ends up saving some of them, something she's not too thrilled about as it costs her a loving boyfriend and a good friend, which leads to one hell of a survivor's guilt. It will, however, go for worse when one by one, the should-be coaster casualties start dropping like flies in one fatal accident to the next, all in the order they were supposed to die in the accident. Now aware of her predicament, Wendy has no choice but to figure out the pattern and clues to stop an inevitable force hunting them down or she might end up next on Death's list.

Final Destination 3, as far as I can tell, could have been a rather dull entry to the series as it retreads the same plot that backbones the first two films, a concept we all by now can probably figure out on our own. Nevertheless, the fun of these Final Destination films is less about who will die next and more on how, and how here is answered with loads of stage blood and shredded latex, by far the only winning factor to this entry. 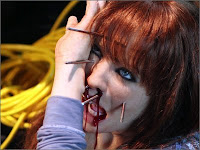 In comparison, the first two Final Destination movies can be seen as teen thriller-cum-supernatural slashers with some metaphysical themes while Final Destination 3 is more of the splatter-filled 80s teen slashers, throwing off factors like proper character build and plot development in favor of off-the-wall kills, paint-by-number cliches and stereotypes. Not any of that is a bad thing honestly, but it kinda stepped this entry down a lot from the imaginative dead-teenager flick that started it all and puts Final Destination 3 into a commercialized kill-a-thon roller-coaster ride. (Pun intended) With that, while still maintaining a level of build and tension the first two movie have, Final Destination 3 focuses more on the impact of these kills, molding around the idea of overkill. Indeed, the deaths in this entry come in rather torturous and/or overdone as the mutilated gets dismembered further and splattered beyond recognition, done gloriously in traditional practical effects with some CG enhancements in full onscreen.

So, being a refresher to the already familiar flow, Final Destination 3 is still a lost to those who are hoping for a smarter or, at least, a more creative entry to the series but that didn't stop this entry from being fun. By now, you would be expecting the story could at least explain a little bit further on how Death works in these movies as they have in the first two, but the plot instead produced a re-hash of the first movie with the tragic disaster minimalized into a tragic "accident" (there's a difference), interestingly leading this movie the only one in the series where the authorities are completely absent thus focusing completely on the teenagers as lamb for the slaughter. It's sadistic, yes, but it was made for a specific kinds of audience and at some point, the pattern still works and the nihilistic undertone of the movie (especially the ending) kinda helps maintain the tone.

They always claim that third time's the charm but I guess that isn't applicable for all, though Final Destination 3 does try its best. Gorno-addicts and enthusiasts might find a worthwhile time through this one, as too those who're willing to trade out smarts for bloody parts. It could have been worse, and I mean really worse -*COUGH*THEFINALDESTINATION! - so let's just thank the invisible forces for these small mercies, and hopefully this series can continue a stable footing.

Bodycount:
7 riders mangled in roller-coaster accident
2 females incinerated in malfunctioning tanning beds
1 male had his head shredded by a truck engine fan
1 male had weights crushed his head
1 female gets nailgunned on the head
1 female impaled by a broken flag pole
1 male crushed by a falling cherry picker
1 female crushed by a dislodge train wheel
1 male filleted in between the train and tunnel wall
1 male and 1 female mangled in train derailment
10 passengers mangled in train derailment
1 female ran over by an incoming train
Total: 29
Posted by Kaijinu at 6:04 AM