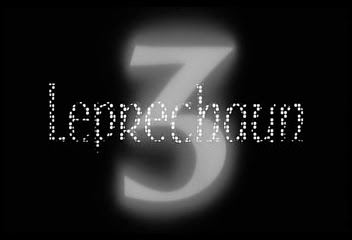 Lights, tits, and gambling. Whether you like it or not, Vegas is here to stay and all them greedy big wigs will be crawling all over it. So why not let some psycho go loose and kill them all? They deserved it at some point, right?

Well, very few slasher flicks seem to agree (and I mean very few), but most of them are garbage. (Still couldn't get over with The Las Vegas Killer (1987). I'm telling you guys, don't waste a minute on that joke of a movie!) So comparing this yet another entry to the cheesy horror franchise known as Leprechaun to the other Sin City Slashers, it's a Godsend for many arguably good reasons.

In what seems to be another "reboot-sequel", the Leprechaun this time have been turned into stone and was to remain like that so long as an enchanted iron medallion worn around his neck will not be removed. For some reason, he's under the possession of a scruffy guy who's willing to sell him for twenty bucks at a pawn shop in Las Vegas, but not before warning the shop owner of the medallion.

Curiosity gets the better of the owner. Medallion gets removed. Leprechaun returns. Hurrah!

All the while, we got young Scott on his way to college and decided to be the good Samaritan of a lovely gal named Tammy, stranded on the road. Escorting her to the Lucky Shamrock, the casino she works in as a magician's assistant, Scott got entranced and tempted with all the gambling but sadly, he has a nasty streak in terms of luck and gambled all of his tuition and housing money. (Heartily earned by his parents no less. What a jerk!)

Hoping to try again, he decided to sell his father's golden watch for some cash to the exact same pawnshop across the street where the Leprechaun is on the loose. Scott then finds, other than the dead owner on the floor, one of the Leprechaun's gold coins which can grant one wish from the holder. (based on a low-budget animation playing ala computer, no less!) He nonchalantly wished for a winning streak after hearing this and to his surprised, finds his wish suddenly came true as he's zapped back to the casino and winning chips like there's no tomorrow!

Generally not happy about this, the Leprechaun sets his laderhosen into hunting down the fool who has his gold, which proves to be easier said than done as many of the casino's owners and patrons found out about the coin's magic and has stolen it to grant their wish. One greedy shmuck at a time, wishes are granted and then twisted as the Leprechaun kills off those who uses his gold. And when a hot magician's assistant is threatened, it's up to Scott to save the day! So long as he can keep his focus away from the craps...

Just like the first Leprechaun sequel, Leprechaun 3 is a stand-alone entry that completely disregards the events of the first two films. Some mythos are obscured, while others re-tooled; in here, we're educated that each of the hundred pieces of shilling in the Leprechaun's pot can grant one wish and is also the source of the Leprechaun's power. There's also a weird subplot involving a Leprechaun's bite and blood as a concoction that can turn a victim into a Leprechaun himself. With these many rule changes, it's best to try and forget what we all learned from the first two films and just run this as a fresh start, which is actually a good thing as the title certainly can stand on its own plot and is generally a fun one at that.

Apart with some pretty good plot points, Leprechaun 3 finally sinks its teeth with some gooey gore and hefty laughs. Well, the laughs could still use some work, but the kills are really satisfactory. Nothing above the first two but, compared, it's wittier and devilishly sly as it took the old Wishmaster route and each victim's death is somewhat ironic to what the victims asked for. The best ones being that of a lady's longing for a younger bussoms and a pathetic magician's plea for better illusions.

The casts is a weird gallery, to be frank; the characters, as paper slice thin as they are, they're funny and pathetic enough to bring you a wry grin now and then. John Gatins plays our lead hero Scott, whose redeeming factor is that despite being tempted into greed, he still learns his lesson in the end and regrets his action, but not before being turned into a humorously bad Leprechaun-Human hybrid who spats out rhymes and gives kisses of death. Ironically, he was more rootable as a freak than a greedy human. We also got the sexy yet morally well-meant stage assistant Tammy, played by Lee Armstrong, who spends most of her time in a showgirl's suit and comforting a guy she just met hours ago. And then there's the hilariously bad (intentional or not) John DeMita playing Flavio the magician, whose cheap and desperate tricks, and arguably have the best death in the movie is enough to raise a positive rating for a satisfied fan. Warwick Davis is, well, still cool as the wretched Leprechaun, but his antics works a little better here since it goes along well with the setting. Wanna see the little guy have fun with Elvis? Only here, baby~!

The series' best entry in every aspect, from gore to giggles, Leprechaun 3 openly welcomes every cheese-heads out there for one night of blood stained chips, hash brown munching and Leprechaun dung madness. Don't know what happened with the first two? No worries, mate! Continuity isn't this series' sharpest knife (nor is logic), so turn off lights, microwave that pizza roll and prepare to laugh, grin and scream!