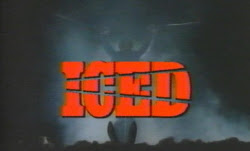 
Some time ago, a group of young hot-blooded teens was staying at a skiing lodge when one of their least likable buddy ended up skiing to his death after he found out the girl of his dreams isn't into him at all. To be frank, with the way he was acting prior to his death, I couldn't imagine anybody being into him. Ever.

Now fast-forward four years later, the teens (now young adults) get invited back to the same skiing lodge by mysterious host. With little to do, the group decided to catch-up with one another, rekindle relationships or simply just have fun. But little do they realize, someone wearing a blue jumpsuit and broken orange goggles is out to get them, taking his time to study his victims as nothing much happened around the next 30 to 40 minutes in this movie other than talk, drug and fuck. Least he's clever enough to know his targets but what does that do for us?

About an hour later of talking, cooking and other casual stuffs, the killer finally begins his (tame) murder spree, following it with the cliched final girl chase scene that leads up to a reveal that barely rocked anything and a Carrie-inspired shock ending involving another fast-forwarding into the future (five years this time) and a bleeding snowman.

Frankly, Iced failed to be anything but a run-in-the-mill slasher. The movie is paced steadily as a snail, light on the gore and cheesed up to the extent that anything the cast says sounds a ridiculous. The picture quality and camera work is good and all (Look at that visor POV shot! lol), but with all these flaws, I find it hard in my part to enjoy this movie. If it wasn't for my fast-forward button, I would had dozed off with all that talk and waiting for that murderous skier to strike. (I'm pretty sure I didn't miss much from all those skipped scenes. They all look the same. )

Iced garnished some sort of cult following for some odd duck of a reason (Must have been the hammy plotting), but when it comes to snow-based slasher movies, I think I'm more inclined to enjoy one in the likes Shredder, Cold Prey or even Ghostkeeper. I'm leaving this for the world to judge...

Bodycount:
1 male skis off a cliff and lands on rocks
1 male ran over by snow plough
1 male gets a ski stick through the neck
1 female stabbed on the eye with icicle
1 female electrocuted on hot tub via dunked live radio
1 male caught on bear traps, killed
1 male stabbed on the chest with kitchen knife
Total: 7
Posted by Kaijinu at 2:54 PM