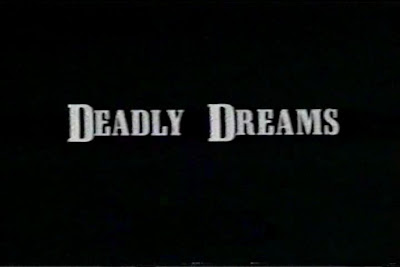 Eversince A Nightmare on Elm Street (1984) introduced the idea of murder by dreams, you would have expected many of our 80s entries would try to cash-in to its success and try to take a shot on chucking kids into the dream realm to die, just as many had tried to get teens into the woods to be killed after Friday the 13th (1980)'s success or have silent methodic killers terrorize people in the streets just like in Halloween (1978). Ironically, the only thing ANOES successfully passed on to its would-be imitators was the idea of having their killers crack one-liners and bend reality via the supernatural; almost none of them tried to touch the dream world concept, but some did found other ways of utilizing it.

Deadly Dreams (1988) is one of these movies; it's about Alex, a man haunted by a tragic past ten years ago, wherein his parents are murdered one Christmas Eve by Perkins, a disgruntled business partner. Though the killer's reported to had committed suicide the same night of his murder spree, Alex suffers recurring nightmares involving Perkins, still wearing his wolf mask, stalking and murdering him or anyone dear to him. So now 21-years old, Alex is currently undergoing therapy to overcome his nightmares and try to live a social life as normal as possible, but this is somehow proven harder than said when a mysterious figure in a wolf's mask begins showing up around the corner even when he's awake.

Could Perkins still be alive and keeping his vendetta? Or is Alex loosing his mind? Maybe perhaps living in a town that celebrates deer hunting seasons and littered with hunters wasn't such a bright idea for a fellow suffering from trauma but, eitherways, someone's after Alex and there'll be twists and turns you'll never expect.

We can actually count this movie as a tribute to 50s/60s psycho-thrillers or a forerunner to the 90s revival, where rich benefactors are haunted and hunted by loonies that are either real or imagined. This in mind, much of Deadly Dreams' murders are more of false kills that are later revealed to be dreams; some are obvious, some have their varying shock values, but the movie's strengths lies little on these murders but more on the narrative that has us wondering if the killer is really someone who's mistaken to be dead, someone attacking from the grave, or someone hoping to drive the lead mad. (Being one of the sons of a rich family, he's entitled for an inheritance. So you could only wonder if this is all just an elaborate scheme to rob Alex of his future riches.)

Deadly Dreams is passable in terms of photography and direction. The film is paced and evenly written to develop all the players (hence why some might see this movie's 79 minute run time to be longer than imagined), though a few scenes and dialogue couldn't escape being cheesy. The film's hopeless outlook also gave it much effectiveness as a twisty thriller and help the impact of the surprise ending, thus finishing with a slasher that felt more like a bloodier version of an afternoon soap opera, so those expecting a traditional gore-fest might be put off.