Play The Game and Say His Name: Knucklebones (2016) 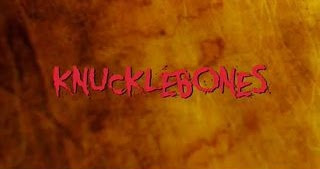 I am a simple man. Give me a slasher with an interesting villain, some good practical grue and a pace that doesn't sleep me into oblivion, like the movie to be covered here, and I am happy. Shallow happiness, maybe, but regardless.

Our B-flick gore-a-thon starts with a brief dabble with Nazi occultism as we watch a scientist conducting a summoning with a scantily clad babe and a couple of guards for the fuhrer's cause in 1944 Germany. But as you would expect, the summoning proves to be a little too much for Hitler's underlings and the conjured demon, the titular Knucklebones, wastes no time picking them off one by one. Cut forward to 1976 Texas, where we watch a lady working at a sweatshop suddenly starts breaking apart before a massacre happens offcamera, leaving only a young boy alive to witness the bodycount and the creature responsible for it.

Now in comes flashforward number two, taking place forty years later (or, y'know, the present) and shifting focus to one lovestruck teenager Lisa Avery (Julin) getting the bad end of a relationship when her fiance decided to split, a news too much for her delicate self to handle so she attempted suicide. Lisa survives and now copes with the depression by joining her friends for a late night ghost hunt in an abandoned building that used to be the same sweatshop where the 1976 killings happened. (I guess a regular beer run is out of the question that day?)

But instead of spooky specters, the gang instead finds a box full of Nazi gear and a small chest containing summoning stones made from 2,000 year old human knuckle bones, along some cryptic paper describing how to summon a demon using an ancient dice game. Thinking it's all malarkey, they play the game and unwittingly summons Knucklebones back into the mortal world once again, ready for another night of slayings.

A melting pot of Friday the 13th hack-and-stab and A Nightmare of Elm Street supernatural wisecracking villainy, Knucklebones is a movie made with the late 80s generic, hole filled and cheese tainted slasher plot in mind, something we've definitely have taken a stroll down before from attractive looking casts with the inability to deliver dialogue and needless T&A just for the sake of butt shots, to retreads of cliched teens behaving stupid choices. (playing with an obscure game that obviously reeks of evil, splitting up after seeing your friends get murdered, going back to save that one guy who's dumb or noble enough to fend off the killer to give you the time to escape, those lil' jigs) It's undoubtedly one of the more standardized slashers that abides the dead teenager rules to the tee, but it is also manic enough to be passable for the kills and creative insanity it managed to work with despite its low production.

The movie has a filmic quality to its picture and its pacing doesn't skimp much, always leading to something interesting or unexpected to actually keep the flow going. It's climax is also an odd yet enthralling twist on your usual girl vs monster showdown, leading to a slightly unforeseen dark turn of an ending. Our villain, Knucklebones, has his moments of brutally originality with his murders, though a few of them seems to be butt-related including a callback to that tent sex double-murder from Jason Goes to Hell (1993). He has quite a personality with his terrible one-liners, often coming out as cocky and cruel as most Freddy Krueger clones tend to be, but I do dig his skeletal revenant design which is quite fitting to the skeletal motif of the ritual used to summon him and how he manifests himself into the mortal world which gleefully doubles as a kill.

If you are looking for a smarter slasher, then I will not deny this movie isn't going to be for you. No, this is a movie made for the fans of bare plotting with high gore. If you have an open mind, however, or just ready to switch off for the night for some macabre cheese that's so feisty its gouda, then why not try out Knucklebones (2016) for that splatter-happy good time?

Bodycount:
1 female killed, blood splash seen
1 male beaten with a rifle
1 male strangled and decapitated with a rifle's strap
1 male had his face beaten off with a rifle
1 female shot point blank on the face with a rifle
1 female mangled apart
1 victim killed, hand seen
1 male seen disemboweled
1 female seen murdered, method unknown
1 victim seen decapitated
1 victims seen mangled and stuffed inside a locker
1 male and 1 female seen murdered, covered in wounds
1 male seen dead with a back wound
1 female mangled apart
1 male gets a chainsaw shoved between his legs
1 female slips and impaled through the neck on a steel rod
1 male castrated during coitus with a limb cutter
1 female sliced in half during coitus with a limb cutter
1 male gets blow-torched on the face
1 male had his head split in half with an axe
1 male ran through with a machete
1 male found dead with a throat cut
1 male mangled apart
1 female skewered through with a thrown broom
Total: 25
Posted by Kaijinu at 12:03 AM