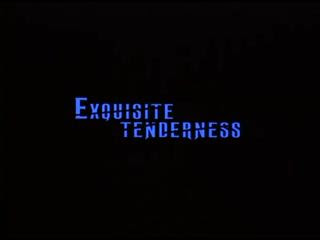 Exquisite Tenderness. You can either expect an Italian giallo thriller or an erotica with a title like that, but a slasher flick? Hurm...

After a crisp black-and-white opening featuring a 1950s boy witnessing a doctor bloodily botching a surgery, the movie makes its way around its next 20 or so minutes something like a medical thriller, with junior doctor Theresa McCann (NYPD Blue's Isabel Glasser) witnessing fellow doctor Roger Stein (the ever genre-friendly Malcolm McDowell) conduct an experiment on a wild baboon for some drugs he is developing to substitute kidney dialysis. The animal, however, goes crazy before collapsing dead, which should be a clear indication that the drug isn't ready for any use.

Stein, though, says otherwise as he plans on administering the drug to human patients, much to Theresa's shock. She manages to prevent this, saving one of the patients who's in critical condition, only for a mysterious surgeon in a face mask to step in later and drug the patient into bleeding to death. Thinking Theresa's actions may have something to do with the incident, the hospital suspends her for the time being while the matter gets being investigated. Theresa, in turn, believes the death involves Dr. Stein and his illicit experiments, so she decided to tag along her colleague/lover Benjamin Hendricks (James Remar) to get evidence and expose Dr. Steins' wrong doings.

This possible conspiracy drama, in an oddly timed curveball, gets thrown off the window quickly as Stein is found murdered and the mysterious surgeon is seen skulking around again. After a brief cat-and-mouse chase, the surgeon gets apprehended and is revealed to be Julian Matar (Sean Haberle), Theresa's former lover and a doctor she once got involved with in conducting unorthodox experiments on tissue regeneration.

This twists would soon have us following a psycho-on-the-loose plot with Matar, last seen in a coma after jumping from a window but now miraculously recovered, eventually escaping his capture to return to Theresa's hospital where he proceeds to kill off those who were responsible for his dismissal, as well as those unfortunate enough to be in his way. It's nothing but your standardized bodycounting from here on, with a sleek mid-90s look and even a twist on the "man of steel" killer trope with Matar's ability to withstand injuries so long as he keeps injecting himself with the experimental serum he concocted from harvested goop taken from his victims.

Director Carl Schenkel definitely knew his way around making this film as sadistic and unsettling as possible to make up not only for the far-from-original plot, but also for the rather off-kilter pacing and direction, throwing in perturbing scenes of self harm, needle attacks and some bits of bloody killings that occasionally pops up from time to time, done in above average make-up and gore effects to keep things gooey and messy enough to be watchable at most. Exquisite Tenderness certainly lacks the panache to match its flamboyant title and be anything else but a slasher flick with a medical background, but it is still an enjoyable stab for a horror movie (and even more so compared to Schenkel’s earlier serial killer thriller, Knight Moves (1994)) with its fierce and sadistic imagination within the killing spree department and the mad science behind our boogeyman.

Oddly underrated by most horror fans, Exquisite Tenderness certainly deserves a somewhat wider recognition for (if nothing else) slicing through and carving up an entertaining slasher. If killer doctors like Dr. Giggles (1992) and Nurse 3D (2013) are your gig, then this cheesy mindless bodycounter is right up your alley.