An Evidence of A Slasher: Unlisted Owner (2013) 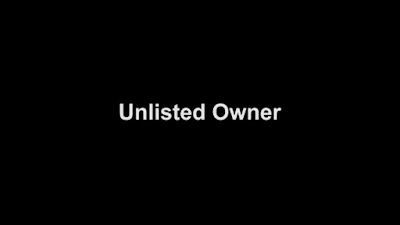 
What we have here is yet another found footage slasher flick, one of many that's been popping in and out through out the years, most of which remain unnoticed and Unlisted Owner kinda fares no better. Not with its micro-budget and faux document format that's overly familiar by now. Still, does it deserves to be left in the dust or does it, perhaps, earn more of our viewing for how on the nose it is on following the slasher format?

Unlisted Owner opens with a clunky yet light home video of a family moving into their new house before taking a grimly dark turn as we suddenly scratch-cut to one of the household’s daughters sobbing, claiming that an intruder is in their house. Next thing we know, we get a shot of the father dead in a basement and the entire family of five turns up murdered just hours after settling in.

From here, we then follow another set of footage shot by a group of friends who live in the same town as the murdered family, who are now the latest victims of the infamous Owner Killings. The gang was originally planning on spending the night camping and getting shit-faced in the woods, but with the murdered family's house being just a few miles away, the temptation to break in and document the crime scene is just too much to ignore eventually. Unfortunately for them, who or whatever is responsible for the killings is still in the house and has now set their eyes on ending them, one hapless victim at a time.

As a slasher and found footage hybrid, Unlisted Owner does the remarkable job of bringing the best of both sub-genres, boasting a hefty kill count while using the stylized psuedo-documentary camera work to boost the creep factor of the murders, which certainly help the matter that the kills were mostly offcamera, giving them that near-authenticity. The backstory behind these killings is also delivered interestingly as a brief interrogation of a side character edited randomly towards the mid-beginnings of the movie, a spin on your obligatory campfire tale told to give us a bit of an idea on who or what will be killing our victims, as well as to why? (And, I guess, this can also be considered as this movie's doomsayer character as the interrogated will never make another appearance through out the rest of the film...)

The only downside of this is that all it'll take about 40 some minutes for the movie to get on these gritty bits after the eerie opening murders, which means we have to deal with a group of obnoxious “friends” who's main trait seems to be to argue and shout at each other over trivial things. In a way, it does make them more organic than your dead teenager movie stereotypes, but the lack of likability from these characters and the matter that they're hardly developed at all warrant very little reason to invest in them, making their demise anticipated and appreciated but tedious for lacking depth or care.

Still, I find the effort put into Unlisted Owner deserving of some attention, especially if the final product halfway works as a slasher hybrid. If only the middle run wasn't so rude and prude all the way, or perhaps splatter a bit more of the red stuff here and there to make up for putting us through with the torture of drunken teenagers being themselves, I would have liked this film more but for what it is, I say it could be worth a rental's night or two.