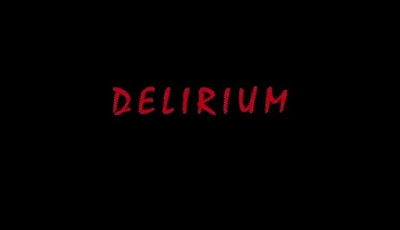 Right off the bat, you can see, feel and hear the $9000 micro-budget this movie limited itself with, but should I be worried? Afterall, it didn't took millions to budget The Mutilator (1985) or Truth or Dare? A Critical Madness (1986) and these films end up being some of my favorite guilty pleasures. Who's to say this one's gonna suck?

Then again, those films were at least creative with their outrageous kills and have an overall cheesy play on its plot, while Delirium have murders that are okay-ish(?) because micro-budget. Oh, boy...

Buddies Lucy and Sandra, token black dude Brad and backpack-carrying geek Dennis see a flyer at campus one day, in which dude bro-type Kirk and his hottie girlfriend Reyna are looking for people to hang out with them at a Spring Break party and share the cost of the trip. Taking up the offer, these four college kids are next seen on the road with the inviting couple, stopping in a diner to grab a bite or two and ask for shortcuts.

The trip goes from good to worse, however, when their car breaks down and the nearest town happens to be a long walk away through the evening. Under the scorching heat and with tension rising among the group, the teens will soon find out that the wilderness isn't the only thing threatening them as a mysterious shady figure begins to follow them with murder in mind.

As much as I don't want to see Delirium as this bad horror flick since it does have its good points such as its easy to swallow plot and a few passable gore, I can't really help but feel so underwhelmed and distracted from the its low-budget execution. The dialogue's cheesed-up whenever you get the chance to hear them properly and the acting that goes along the way is nearly as laughable as the choreography done for the fight scenes at the last third of the movie, none of which helping the fact that the characters are so cliched that they're pretty predictable to the point of boring. (Yeah, that's definitely another guy playing the killer. Not one of the quieter teens!)

I know that this is a do-it-yourself flick with mostly inexperienced actors and a budget of a nearly ten grand, but a little more imagination and livelier execution definitely could have save this movie from being so bland and unexciting, both this film succeeds on doing even with the clear Italian giallo aesthetics they're going for with the killer's motif and scenes. Needless to say, the uninspired simplicity of both Delirium (2007)'s story and direction may have placed it to the void of forgotten rentals, collecting dusts along with other dull micro-budget cheap frights that only hardcore horror collectors would dwell to in and out from time to time.