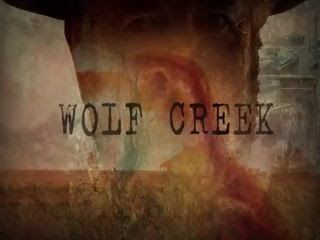 I understand how turning a film franchise like Wes Craven's Scream into a TV series sounds like a passable idea since the movies' murder mystery premise can be easily translated into a weekly small screen whodunit outing. (With varying results) But what about Wolf Creek? A slasher franchise that, so far, focuses on the murderous misadventures of a racist, sexist, foul-mouthed serial killing pig shooter from the land down under, played by veteran Aussie actor John Jarratt? Well, easy! Let the ole' pig shooter do his business while mostly focus the entire mini-series on a survivor's long perilous journey to get even.

On vacation in Australia with her family, 18-year old Eve Thorogood didn't see it coming: the man her family invited for dinner for saving their son from a croc earlier that day turns out to be a serial killer named Mick Taylor and he's making a quick work offing this family of tourists after feigning friendship, cutting daddy's throat, throwing a bowie knife to mum's face and shooting little brother with a rifle. He soon chases Eve to the outbacks, seemingly shooting her dead and assuming the crocs got to her body when he couldn't find it, though, unfortunately for Mick, the latter wasn't the case.

Surviving the attack, Eve gets rescued by a couple of birdwatchers the next day and finds herself hospitalized while her family's murder gets assigned to a detective Sullivan Hill who have been investigating a series of similar murders apparently committed by the same outback boogeyman for years. Wanting revenge for her loss, Eve steals a folder full of Hill's cases, buys a van and sets off to follow the bodycounting breadcrumbs left behind by Mick.

With only six episodes to follow through, this incarnation of Wolf Creek made a wise decision to make itself less about Mick and focus more on Eve's travels across the Land Down Under, facing other things that might kill her such as animal bites, animal traps, being wrongfully accused of carrying drugs, horny and vengeful biker gangs, and even another murderer hiding in plain sight. Each episode felt like a story of its own set within a larger plot, centering on one of these dangers in pure Ozploitation fashion thus developing the parts of the Wolf Creek universe that didn't get to be explored in the movies.

This direction help develop Lucy Fry's character Eve as a protagonist as she goes through these hardships and deadly close calls with expected and unexpected results, making friends and enemies alike as she defends herself and save a few people she comes across, thus making her more dimensional than a typical slasher heroine. Her journey, though littered with danger, is as adventurous as it can get, littered with colorful characters that varies in importance and purpose in the entire story, as well as a decent dash of intrigue, dark humor and some hardcore action.

On the other hand, the horror elements rest solely on Mick being the sadistic and foul-mouthed evil on two legs that he is from the films and, despite his limited appearances until the last few episodes where he eventually closes in on Eve, it works mainly on the fact that there's a little role reversal in play in which he finds himself hunted down for a change and he sets to fix this as soon as possible, in any way he can. The ensuing carnage first starts typically as Mick, as sure as hell that he's getting aware with another tourist purge, murdering folks (and inconveniencing some) as he always do and it is as brutal as it can get for TV, which meant we don't get a lot of gore and at least some of them occur offcamera but the deaths are passable and troubling in their own way. Once he figures out Eve is after him, his presence got considerably unnerving as you'll never know how close he is to catching our avenging heroine first or whether she will even have the chance against him now that he more or less have eyes at the back of his head, watching out for her.

Now as good as this series can get, it is not without it's own flaws and though some of these would be my own nitpicking, one can agree that giving Mick a backstory to what can be summarized as his first kill felt unnecessary and adds little to the character. If any, it kinda killed off some of the mystery to who or what he is as, in all honesty, one cannot get away with this much murder in this day and age, nor can anyone survive the treatment he got from both the films and Eve in the end of this mini-series. There is a matter of the supernatural being introduced in the last few shots of the finale but it personally felt misplaced and, if hinted to be anything connected to Mick, just a too easy of an explanation as to how our villain operates as a slasher character.

All in all, the small number of episodes perfectly paced what is technically the best of Ozploitation cinema presented in TV format. Among the many slasher series I've seen, Wolf Creek the series is a masterfully crafted tale of a slasher victim's outback odyssey of revenge tops them all hands down, so much so that I basically watched the entire series in a matter of two days after and before going to work. It is just that good. So for all of those who are yet to see this series, I high recommend this hack'n slash drama for your viewing pleasure and to quench any need for small screen bodycounting mayhem.