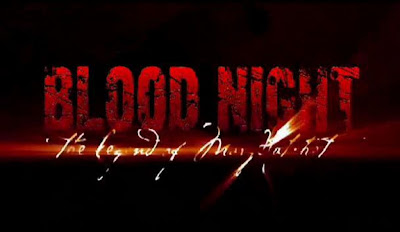 One late night in 1978, a young Long Island girl named Mary gets shipped to an insane asylum after suddenly snapping out of nowhere and brutally murdering her folks with a scissor and, as the title suggests, a hatchet. Eleven years later, Mary got raped by a guard and gave birth to a stillborn nine months after, a bad news that reawakened Mary's homicidal streak, sending her off to a killing spree (in the nude, no less) that ends with her getting gunned down by responding cops.

Over time, this tragedy spawns a local urban legend, as word around town says "Mary Hatchet" still wanders the earth as a murderous spirit, looking for her lost baby and killing people who witness her presence. The more mischievous youths of this small community, however, opt to remember Mary's rampage by making a holiday out of it dubbed Blood Night, a mini-Halloween treatment where pranks, parties and horror flicks are a must.

In comes Blood Night '08, where we follow a group of teens enjoying the festivities, from drinking copious amount of alcohol and smacking red paint on unsuspecting female bottoms, to invoking the spirit of Mary herself via séance (at a cemetery tended by Bill Moseley as Graveyard Gus) and accidentally watching someone's parents' sex tape disguised as Attack of the Killer Tomatoes. It's all fun and games until they start to end up in multiple pieces. Could the ghost of Mary Hatchet be out to get them? Or is this the work of a rather nice plot twist walking around, wielding a pickaxe?

Blood Night is one of those slasher films that exists with a well-meaning goal of bringing its viewers the nastiest gore under the impression that it is a throwback of 80s bodycounters. In a simplistic way, it kinda does bring forth a nostalgic air as the gore and blood effects used for all of the kills here are done in amazing practical latex and the slasher attacks get more intense the further the story goes, resulting to an impressive bodycount in the end. There's even a cheesy explanation chucked in to answer why the killings are happening and why they're so brutal, something that gets connected with the film's decent twist that I sincerely didn't saw coming upon my first viewing.

The film's not without flaws, however, as it does take a while to get the present day massacre going after the blood-soaked gory opener, hobbling about half way into the movie before one of the teens finally gets messily snuffed and all hell breaks loose. This meant we get to spend a rather sizable time knowing our characters which would have been okay if these guys weren't so disposable, barely making themselves stand out as anything else other than one-note interchangeable lambs for the slaughter. In fact, Blood Night practically lacks main characters to focus on with how much the story shifts its attention from one set of teens to the next and the sheer number of casts definitely didn't help sort out who's who and why they matter in this movie. If anything of a consolation, though, fan favorite talents Bill Moseley and Danielle Harris brought out their best campy performances with their little roles, making them slightly more memorable compared to the rest.

With this, Blood Night is, by all means, just us following some shallow partygoers with beer and boobs in their brains getting killed eventually by something that may or may not be an angry naked urban legend. Nothing spectacular story-wise, but at least its tone has us enjoying their shenanigans and eventual demise, with all the hamminess and cheesiness conjured up for extra camp and a bit of T&A for that exploitative slice. As a bloody and chunky junk food horror film, it's nothing serious except how silly fun and deliriously easy on the eyes it can be with the right mindset. It's a simple slasher that doesn't beat around the bush with overly complicated drama or mystery, so if you just wanna boogie and see some hapless twits die under a hatchet, then this movie is all of that with a passion!

Bodycount:
1 male had his jaw shattered with a hatchet
1 female gets a pair of scissors to the eye, face chopped with a hatchet
1 female had her neck twisted
5 orderlies killed (method unknown)
1 male head seen
1 female shot dead
1 male and 1 female beheaded (story, debatable)
1 missing baby (story, debatable)
1 male had his head split in half with scissors
1 female stabbed on the head with scissors (offscreen)
1 male decapitated with axe
2 males found with throat slits and stabs
1 male had his face slashed in half
1 female pickaxed on the back, disemboweled
1 male gets a hatchet to the face, forced unto a fusebox (flashback)
1 male gets a pickaxe to the neck
1 male killed, blood splash seen
1 female had a hand chopped off, killed
1 male pickaxed to death
1 female strangled to death
1 male nearly decapitated with a hatchet
1 female presumably killed
Total: 28 (?)
Posted by Kaijinu at 2:33 PM