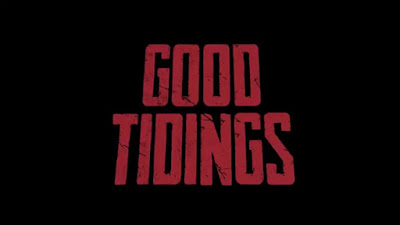 In this season of giving, United Kingdom decided to give us another take on a Christmas slasher, one that lacks any real depth and meaning other than to see homeless people try and survive one of the most insane worst case scenarios: a trio of killer Santas.

Good Tidings starts simple with a lone man at a country cottage drunkenly readying himself for a Santa gig, failing to notice three masked men in hospital gowns surrounding him. By the time he did, it was far too late and literally loses his noggin at the end of a wielded shovel. The trio of loonies then dons the man's Santa suits and masks (why he had so many and why it came with creepy mask is still a mystery to me), before driving off to some place they can wreak havoc.

In the meantime, Sam Baker (Alan Mulhall), a homeless war-veteran, is holding his own Christmas get-together with his fellow hobos and runaways at an abandoned courthouse he claimed and kept open for those in need of a warm home and simple meals. This gesture of kindness will soon be paid in blood, pain and death, unfortunately, when the Santas decided to crash and waste to time starting a bloody and brutal game of cat-and-mouse.
As mentioned, Good Tidings has little to go around in terms of deep plotting as, in its core, it is a simple survivalist siege/slasher hybrid pitting a group of homeless folks (focusing mostly on three: Sam, runaway druggie Roxy (Claire Crossland), and the motherly Mona (Julia Walsh)) against a trio of sadistic murderous Santa loons. It's guilty of the few dim or impossible logic most slashers suffer from, such as tinsel garland being durable enough to lock doors or the fact that none of the panicking homeless folk ever thought of ganging up against one killer at a time considering there's enough of them to deliver a good fatal beating. Instead, they all run away scared like cattle in a slaughterhouse, pretty much letting the Santas have their fun. (And leaving us imagining a spree killing that would have been better onscreen, another point down on my book.)

Perhaps these unfortunate souls have their reasons such as the likes of one victim here with a heart condition, or that they're simply confused and frightened by the sudden meaningless murders happening in front of them during the should-be most joyous occasion in the year. Whatever it will be, it did little to dampen the ferocity of this movie despite showing little brutality and gore.


In its simplicity, Good Tidings still manages to deliver a whole lot of goods from the competent actors and actresses taking their roles with heart and genuine effectiveness, to the intensity brought upon the presence and unpredictability of our killer trio. (Each unusually named after the Three Stooges at the credits) To be truthful, the movie is mostly a treat whenever the three killer Kringles are on screen, as one can never be sure what they will do since they are all portrayed mute and rely heavily on body language to show their individual personalities, as well as giving us strangely (and darkly comical) scenes like them playing around with a severed head or one of them being eerily friendly with one of their captives. A slasher film can sometimes be best remembered with their villains and I will say the men behind the Santa masks here did a damn decent job.

The killings were as standard as slasher movies go with machete and axe hackings. A few decent practical kills were put on screen but there were some CG assisted ones included, thankfully not enough to completely distract us. Pacing is pretty decent despite a bit of slowness around the middle part as this is when most of the more mentally sadistic elements were played. (Nastiest of which was a wife repeatedly forced to kiss her husband's decapitated head. Yeesh) This is quickly remedied by the interesting set-up in which one of the Santas develops a liking to a captive and apparently stirring things between the three madmen.

Despite the low budget and some nitpicks here and there, Good Tidings is, well, good! Not the best to top some heavy holiday horror hitters like the Black Christmas set, Silent Night, Deadly Night (1984) or, hell, Krampus (2015), but it certainly has a lot of better offerings to give us compared to shit like, I dunno, UK's last year disappointment Christmas Slay (2015)? (I loathe that shit entirely) So if you think you've been good this whole year, try not to miss this one! That's enough to put you on the naughty list and our Santas aren't gonna be happy...