Children are scary. High tech innovation going rampant is scary. Put two together with a slight "camp slasher" formula and you will get Let's Be Evil, a "SciFright" thriller that just goes to show how children is indeed our future, whether it'll be for the better or worst.

Taking place in the future of sorts, proud teenager Jenny accepts an offered position in a prestigious and secretive research facility, hoping to earn some much needed cash to pay for her ailing mother's treatments. Joined by two others who accepted the offer, Jenny and her new friends quickly learn that their only guide to the job is an near-sentient AI viewable only through a set of VR glasses provided to them and that their job is to supervise a group of intelligent and calculative children. 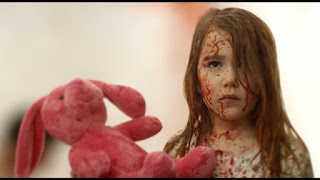 As odd as the job was, Jenny tries her best to make the best of it, going as far as attempting to directly interact with the children despite the disapproval of the overlooking AI. All starts to go downhill, however, when Jenny begins to notice her things disappearing and reappering, glimpses of shadowy figures scurrying across her room, and the children acting much more sinister in contrast to their previously quiet and serious demeanor, eventually hacking into the building's main system and trapping everyone inside. As the lights go out and the facilty is turned against those who the children deem fitting for their sick and deadly game, Jenny has no choice but to try surviving the ordeal and escape.

Now, despite the bodycount-friendly plot, Let's be Evil seems to be attempting to do something far different from your typical teen slasher, evident from the strong Scifi elements of virtual reality and highly intelligent children, as well as a good percentage of a movie being done through POV shots and a low number of potential victims. (Though with films like Wolf Creek showing us what you can do with three to two victims, the latter was never a big deal for me.) In fact, before the hour mark, Evil actually resembles more of a haunting movie with a science fiction taste than a slasher as our characters are subjected more to visual scares of flashing lights, distorted imagery and simulated noises than bloody dismemberment, which would have been okay for me if the approach actually works.

Sadly, for a movie with an interesting premise, Evil was just too full of uninspired executions; the characters, for starters, were barely fleshed out with their one-note personalities thus it was just hard for me to feel invested to them, this including our supposed heroine Jenny which is obviously a big no-no for slasher and/or "partial" slasher films. The actors and actresses behind these characters were okay but I do wished these people were given better materials to work with rather than the cliched rebel girl or lazy teen stereotypes. 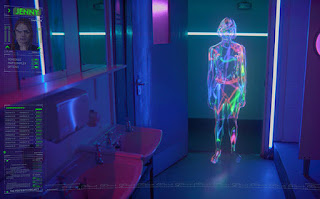 This lack of depth is further seen with the movie's supposed villains as, for an army of super genius brats, they barely look or felt all that threatening. Granted they may have the capabilities of setting a man on fire or smothering one of their caretakers with a plastic wrap, but how often had we seen this before? You got The Horrible House On The Hill (1975), Bloody Birthday (1981), The Children (2008), the Children of the Corn series and the Bad Seed movies just to name a few titles that already got this base covered a lot better compared to this movie's little (and I mean little) nearly-bloodless massacre, so what does Let's Be Evil's kids have to offer? They all act emotionless and are supposed to be super-geniuses? Yeah, I'm sure Village of the Damned and its franchise failed to fill in those shoes, oh wait, no. They didn't fail. And Evil's kids barely made a dent to top it.

Why are the kids killing people? Not a given clue and I could try live with that as the lack of reason is what should have given the coldness of the children more of the needed creepiness, but it instead goes completely in contrast to their other nature, which is that they're intellectual. I would have settled with a reasoning similar to Hal from 2001: A Space Odyssey in which the children think they're doing the world a favor by eliminating those they deem unfit or non-beneficial in their society, but instead you can tell there's a sense of maliciousness in their action (hell, it's even in the damn title, "Let's be Evil"!) so it's just more confusing than chilling on my end.

If we are gonna look at this production-wise, Let's Be Evil is really visually competent and the concept, as I mentioned, is an interesting one, which is why it saddens me so much that the final product was this dull and unmotivated. It could have done a better job (a much more thrilling and/or scarier job) but the lack of scares, blood and insight in its writing just made Evil forgettable as hell and simply a challenge to sit through, even when it's ending. (stupid dumb plot twist...) If you want a scifi killer kiddie flick, The Village of the Damned and its many sequels (and one underrated John Carpenter remake) is waiting for your arrival. We'll wait for you there!

Bodycount:
1 male shot on the neck
1 male set on fire
1 male smothered with a plastic bag
1 female dragged away, killed
Total: 4
Posted by Kaijinu at 9:26 PM