A Slasher of Christmas Great: All Through The House (2016) 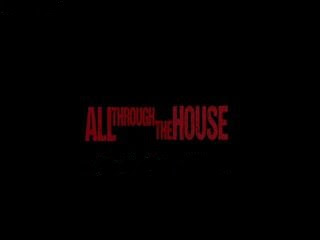 One Christmas Eve night at a typical American town, a lunatic dressed as an unjolly Saint Nick is spreading their own brand of holiday fear, breaking into houses and slaying anyone unfortunate enough to be in their way. As this maniac decks the halls with blood and gore, Rachel Kimmel (Ashley Mary Nunes), a teenage girl returning from college and housesitting for her neighbor Mrs Garrett (Melynda Kiring), decides to tag her friends along and make merry for the festive season, little knowing that the killer is closing in to their house and a few dark secrets will be unraveled as the night goes on and the bodycount goes higher.

In all frankness, All Through The House was a surprising treat for myself as, apart from seeing the trailer some time ago and having a short-lived excitement over it, I have very little knowledge to what I was getting myself into once I got a copy, aside the obvious point that it's another killer Santa flick which may or many not deliver the gory goods.

Now, as a slasher, the film definitely has its cliched moments such as sexualized victims with horrible decision-making skills, heavy-breathing men-of-steel mute killers, and even a story-telling scene wherein an old incident concerning an eccentric neighbor was brought up as a possible red herring. Thankfully, these little nicks are easy to look over and can even give the film that right kind of Grindhouse feel to its run, far from perfect with its uneven audio and a few wooden side characters, but otherwise nostalgic for hitting these classic slasher set-ups just right.

Once the film's momentum gets going, it draws us into a workable mystery surrounding the eccentric neighbor our heroines are housesitting for, coinciding with brutal scenes of our killer Santa slaying innocent people (and a few voluptuously naughty ones) in their homes. While it is kinda obvious that there might be a connection between the neighbor and the killer, how exactly they affix with one another is the film's lingering question for us and the answer falls in very dark and unusual places through a few twists, surprises and Melynda Kiring's performance as Mrs Garrett at the near end, as well as Mary Nunes' final girl going through her own twist in the plot which kinda rings familiar to a certain 2013 3D slasher, Texas Chainsaw 3D.

I personally believe House decently paced itself quite nicely by interjecting a lot of the gory murders in the midst of the mystery's build-up, all of which having a wide array of effectiveness from simple machete blows and hurled paraplegics, to gruesomely gory garden shear impalements and castrations. They're all done the old fashioned way with gruesomely chunky practical effects and free-flowing blood works, some even paying tribute to a few cult classic slasher titles such as Alone In The Dark (1982) and The Burning (1980) (The latter more on the fact as Santa's main weapon is a trusted pair of clippers!) so it's rarely boring even if the scene simply involves our characters discussing. The killer wasn't half bad themselves with their Jason Voorhees/Leatherface-inspired body language and backstory, as well as the intimidating Santa mask he managed to snag up and wear through out the ordeal, so expect some decent stalk-and-creep scenes from the big guy before he delivers his gory Christmas treats for us slasher fans.

A few creepy imagery here and a pinch of actual holiday spirit there, this movie passes not only as a slasher, but also as an low-key independent film that knows the materials it is working with and the audience it is made for. Fans of throwback bodycounters flicks can definitely find an inviting warm fire within the gored-up bodies and unsettling family issues this film offers so if you're not too critical on production value and just in need of a quick fix for yuletide slasher mayhem, Santa's garden shears are ready to cut for you All Through The House!