Incidents On and Off an Accident: Fender Bender (2016) 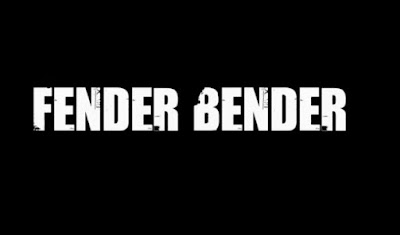 Seventeen-year old Hilary is just having the worst day of her life: not only did she just find out her boyfriend is cheating on her, but she also gets into the titular fender bender with a random driver after he accidentally rear-ends her new car. As she just had her driver's license and did not know any better, Hilary didn't hesitate to exchange informations with the driver, hoping that the troubles wouldn't get any worse.

Sadly, it got worse; upon getting back home, her folks got rightfully upset not just because of the car's damage, but also from the fact that she worried them after storming out of the house to catch her unfaithful boyfriend without giving them a single clue what she was doing. As punishment, Hilary's parents went on to their planned family trip without her and she is to stay in the house for the weekends and settle things with the insurance company.

It all goes further downhill when Hilary's fender bender "friend" starts messaging her later that day and what may or may not be his car is seen prowling across her home. Two of her best friends show up to lighten her mood though, so all will be well, right? Does a gimp-masked giant switchblade-wielding psycho in a car hunting everybody down count as a 'yes'? It doesn't? Well, damn.

Truth be told, Fender Bender is relatively easy on the plot as nearly everything about it is your classic slasher set-up, minus strong exploitation, nudity and a high kill count as it was originally aired as a TV movie. But what it lacks in extreme entertainment, Bender makes up for it by delivering what made slasher films entertaining to begin with, mainly some likable characters, a cool villain and shockingly brutal and intense murder sequences that gets bloodier and more distraught with each dead teen.

The direction has this Halloween (1978)-inspired flow to it that works really well with the movie's simplistic and more suspense-driven tone. Though some of the characterisation were leaning pretty close on the stupidly cliched side, and there can be some unnecessarily slow moments, I am glad to see that Bender still manages to surprise me with some unexpected turns to keep itself fresh and even a bit dark at times. The villain, for example, comes off as a mix of both a silent hulk and a talky psychopath as he switches from and to these two archetypes in the very right moments; non-self aware conversational creep when stalking his victims in their homes, brutal mute maniac with a really cool mask when hunting them.

There's also a couple of worthwhile creepy moments straight out of a sinister home invasion scenario and the bloodletting was deliciously crimson red with the stabbings and one vehicular manslaughter thanks to some really cool practical works and the fact that most of these victims did manage to be likable despite their minuscule development and screentime, all of which leading to a struggle for survival between our lead and the nameless killer, a decent run shockingly made better (or worse, depending on you) with its grim turn of events.

It's strange, really, that something as simple of a story as Fender Bender's could do something this creative without overdoing it, as I can sincerely see from this film that director Mark Pavia really understood and respected the sub-genre. With it's nostalgic 80s atmosphere despite the well-adapted modern touches, the movie is certainly an instant cult fave in my book for having a timeless touch and ticking down nearly all of the right boxes in making a fun and frightening bodycounter. Either see it fresh from the TV or out of a bluray/DVD box, Fender Bender is one of the better slashers this decade has to offer!