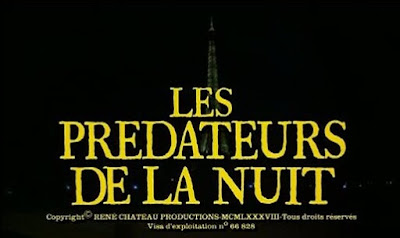 Singling this movie out as a slasher is only a portion of the truth. Should you add medical thriller, mad science, sleazy exploitation, and whatever movie genre allows a detective to fight an uber-muscular yet comically-voiced bodybuilder, then you will have the near-perfect definition for this strange late 80s euro-horror.

Starting the film classy with a shot of the Eiffel tower at night and a very vocal fellow (Vincent Thoma) mellowing our ears with the movie's own theme song, we soon follow Dr. Frank Flammand escorting his sister Ingrid and his assistant Natalie around the city as they have whatever fun rich and successful plastic surgeons can think of. Their evening was soon interrupted when one of Frank's former patients caught them off guard and tried to melt the doctor's face with acid in revenge for botching up her face. Fortunately for Frank, the vengeful patient misses when his sister pushed him away. But for Ingrid, however, she received the acid attack instead, severely burning her face.

Years passed and both Frank and Natalie are finding ways to repair Ingrid's face, most (if not all) of which involves kidnapping beautiful and fair-skinned women in hopes of placing one of their faces to Ingrid's. Why it never dawned on these two that some people will recognize the face they'll be stealing should their project be a success and get themselves in a bigger mess, I have no clue, but they seem to be sticking with this plan as they proceed to add another captive, an attractive fashion model for a new one-of-a-kind watch.

With the model's father rightfully concerned about his daughter's sudden disappearance, in comes private detective Sam Morgan snooping around in Paris and trailing whatever leads he can get. All the while, Frank, realizing he needs a professional's help, asks former Nazi doctor Orloff for assistance, a requests the surgeon is happy to accept as he sees it as an opportunity to hone his mad science talent yet again.

So now we got the mad science part. Where do the slasher bits come in, you say? Welp, just to cater for us blood junkies and gorehounds, Faceless also packs a fair amount of chunky bloodletting on behalf of Natalie and a mute (and sexually frustrated) brute named Gordon whose job is simply eliminate any living leftovers from the doctors' surgeries, as well as those who got too close on discovering their little secret. Truth be told, out of all the murders here, only one felt legitimately in tune with a slasher flick's with a nice chase scene and a power tool-wielding Gordon, while the rest were more or less just extra bloody and grandeur killings you can pull off for a crime thriller. This being said, while I am pretty impressed by the splatterific gore effects here, I cannot help but think that the dead women in this movie aren't the only ones missing their identity.

Basically, Faceless is every B-grade horror and exploitation flicks rolled into one since there's a little bit of something for everybody, such as the likes of unapologetic sleaze scenes, bloody murders, crazy Nazi science, and cheesy action sequences just to name a few. And like most hodge-podged stories, the tone is, unsurprisingly, shifty as it ranges mostly from being unintentionally (or maybe, intentionally) hilarious to just plain gross and uncomfortable, bringing nothing more to the table than some really bad writing in both the sense of scripting and plotting, but saved by the grace of just having the right amount of cheese, some fun (albeit oddly acted) characters and an EC comic- style take on horror and macabre. The pacing is relatively easy to follow too, and rarely boring as something interesting and/or cheesy is always going on, so while it's not a good movie, per se, Faceless has the charm of a really bad midnight picture that only a 70s sleaze-meister like its director, Jess Franco, can provide.

Obviously not gonna be everyone's kind of biscuit, this cult fave euro-horror is mostly enjoyable as a popcorn flick for the no-brainers and tongue-in-cheekers, and I wouldn't want it anymore than that! Some people might want to look elsewhere should they want a stronger mystery or less exploitative "detective story", but for the rest of us horror fans who just wanna have fun, there's nothing Faceless cannot provide!

Bodycount:
1 female hacked with a machete
1 female body seen
1 female injected with a syringe full of chemical into an eye
1 female decapitated with a chainsaw
1 male stabbed through the throat with a pair of scissors
1 female powerdrilled through the head
1 female had her face flayed off, presumably killed
1 male had his head pushed into a hanger hook, impaled
Total: 8
(Note: due to the nature of the ending, I decided not include 2 possible additional victims)
Posted by Kaijinu at 12:04 AM