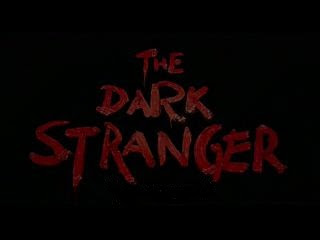 Surely, many of us in the creative medium felt that uncomfortable and saddening feeling of uncertainty, questioning ourselves whether we're really cut out to do the things we do, may it be music, art, acting, or, heck, even writing. Many of us learn to overcome it and accept whatever flaws we have to move forward, while others give in to this feeling and end up wallowing in their own despair.

The Dark Stranger approaches this subject with an amalgamation of drama, dark fantasy and even a little bit of supernatural slasher, as we follow a young graphic artist named Leah Garrison going down a path of self-harm, isolation and depression, in guilt of her artist mother's breakdown and suicide some time ago. Her remaining family, a dotty father and a teenage rocker brother, tries their best to live a normal life past the incident and this includes agreeing with a local art associate to have the late Mrs. Garrison's paintings showcased for an art show. 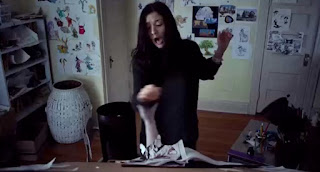 This, however, sets into motion a series of unnatural occurrences, one of which the arrival of The Dark Stranger, a villain inspiring Leah to start a fantasy comic paralleling her life, but at the cost of further harming herself and the deterioration of her own psyche. The more she draws, the more the Stranger crosses into the real world, thus it's only a matter of time and will before the spirit gains power over Leah and have her for himself.

Lacking double digit killings or sexualized victims, The Dark Stranger hardly counts as a slasher if it wasn't for the titular villain, who is basically a more art-oriented take on A Nightmare on Elm Street's Freddy Krueger targeting and torturing artists into killing themselves so he can take their souls, the source of his powers. And while many may argue that emotional and psychological torture-induced suicide barely qualify as a slasher trope (and more of the infamous torture porn sub-genre's), the Stranger actually has the freedom to kill off others who got in the way of his plans, which meant the movie could have easily filled a good deal of its time racking up a bodycount.

Instead, The Dark Stranger tries to do a more developed story by pretty much focusing on the effects of depression on those who are suffering from it and to the people around them. This surprisingly works pretty well with the talents involved, as well as the kind of tone the movie sets itself to. A great bunch of the casts involved help make this approach workable, mainly actress Katie Findlay who plays our lead Leah, giving the role a rather approachable kind of cold shoulder, one that you can see is trying to get past her troubles, despite being forlorn and snarky. There's also TV actor Enrico Colantoni taking in the role of Leah's father with the kind of warmth and concern you would see from a struggling well-meaning single patriarch of two, which sort of reminds of the changed-of-heart Mr. Dennis Johnson from A Nightmare on Elm Street 5: The Dream Child. 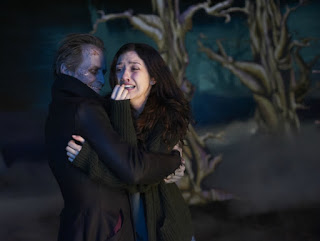 And then, of course, we have  Stephen McHattie in a dual role of Randall Thoth, a mysterious art enthusiast, and The Stranger. In all honesty, I think there wasn't enough of McHattie here to fully ground the villain since the Stranger mostly appeared in his comic book form during the (simple yet expressively) animated segments and the majority of his live appearances were a few minute of scares and one murder. (And don't get me started on his role as Randall. Remember that random scene in Jeepers Creepers 2 where that one cheerleader suddenly gets the answer to what the Creeper is? Randall is basically that) Still, I think his role did fairly better than the rest of the cast I'm yet to mention, basically Mark O'Brien, Alex Ozerov and Jennifer Dale as Leah's love interest, brother and psychiatrist respectively. It's not like they were badly portrayed, just dipping a little on the laughably cliched end.

In regards to the theme of mental illness, the film's approach to this subject is somewhat subtle as it shows a closely realistic take of the condition compared to many other horror films out there, treating it as a phase that could either lead to something better (acceptance and forgiveness) or worse. (self-destruction) The presence of the supernatural wasn't even that obvious and could have been all under the protagonists's mental lapses until the last act, the one part of the movie that I see as its only real drawback; instead of further mixing the idea of the illness into the horror plot, The Dark Stranger more or less threw out all of the development regarding the character's depression and dives straight into pure horror movie territory. While I don't have a big gripe against this decision, they could have either done a Babadook-style ending where both psychological and horror themes were played with much thought and understanding, or (should they really want a purebred horror conclusion) they could have done a much grander approach like, I dunno, a more satisfying fight between Leah and The Stranger? Or at least have them animated to stay true to the movie's art theme?

Still, while the movie has these amateur moments and missed opportunities, what we have now could have been so much worse as, for all we know, the villain would have ended up being another wisecrack-a-minute slasher and our lead could have been another Laurie Strode from Rob Zombie's second Halloween movie. (Yeah, I made that comparison) The Dark Stranger is not going to quench a lot of bloodlust or choke you with a monumental kill count, it is an interesting watch especially for those with an artistic outlet (like yours truly!) and I do hope there will be more of The Stranger in the future, with more onscreen presence!

Bodycount:
1 female cuts her neck with an inking pen
1 female had her neck broken, possible throat cut
1 male implied dead from suicide
1 male shot himself on the head
1 male decapitated with a sword (?)
Total: 5
Posted by Kaijinu at 9:26 PM