Too Many Bodies, Too Little Substance: The Funhouse Massacre (2015) 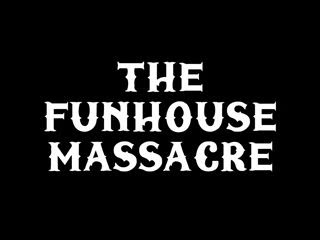 Don't you just hate it when a movie's advertised as something and it's anything but that? Like how Danielle Harris' directorial debut "Among Friends" was at some point marketed as a slasher flick when it's really nothing more than a cheap and boring SAW clone without the bloodshed and more of on talking? Or how some of David DeCoteau's recent horror movies are advertised to star certain actors when in fact it's just their voice doing narrations? Welp, it seems The Funhouse Massacre may have joined this bandwagon as while marketed as a "tribute to 80s slashers", all I saw was mostly "death porn".

Five deranged madmen consisting of a dentist with a powerdrill, a cannibal chef, a taxidermist who likes to disembowel people, a mute overpowered wrestler and a cult leader, are freed one Halloween night by the cult leader's equally homicidal daughter who happens to like dressing up as a harlequin. The ghoulish gang then gate crash a local fair's funhouse utilizing their crimes as a gimmick, murdering and replacing the actors so the killers can pretty much just maim and mutilate whoever goes inside and get away with it since none would be the wiser to think it's all "real".

Soon to be caught in this fiasco is a group of teenagers who eventually discovers people are indeed dying, as well as a duo of local cops, one of which having some sort of connection with one of the killers. Arming themselves to the teeth, it's up to whoever will be left alive from these unlikely bunch to save the night and stop the madness before more lives are taken.

Now, I mentioned more than once before that I can be a sucker for slasher movies that feature more than one killer, especially if each villain has their own gimmick and/or personality. A wide variety of villains normally meant a wholesome collection of creative killings and/or possibly stronger and more intense scenes as they obviously outnumber and maybe even out-strengthen our protagonists, which is why I enjoy titles like Neon Maniacs (1986), $LA$HER$ (2001), the Wrong Turn series and The Hill Have Eyes remake series, just to name a few. So will this mean The Funhouse Massacre is an instant addition to my little cavalcade of interest? Almost, but not quite.

It's hard to explain and I am sure that some of you will not agree, but I personally believe Funhouse Massacre may have done the killings too much too soon that it lost much of the hype even before the real carnage starts. True, we have slasher and slasher-esque movies like The Collection (2012) and Ghost Ship (2002) starting with a colossal bodycount, but at least they slowed down a bit to actually try building some pacing for atmosphere and maybe even some plot and character development. The Funhouse Massacre just has to have 10 dead guys in a span of a single scene, a lot of which are just random people dying easy, senseless and repetitive deaths, something less commonly seen in a true slasher movie and more on a death porn flick, movies that are more or less a collection of death scenes than an actual story. (Though one scene did almost made the think it'll go down the familiar stalk-and-kill route but, sadly, that too ended quickly)

Not only that, but I also felt that we only get to see a few of the villains in real action as a good bunch of the killers kinda just stayed in one place and do their (mostly offcamera) murders there or just bark around orders. For a supposed 80s slasher tribute, having two out of the six killers introduced go out, chase and kill people like a real slasher villain should just felt underwhelming (especially since one of them is played by Clint Howard!) and kinda odd considering these guys end up with hundreds of dead bodies littered all over the place. (Overpowered much?) And with all of these deaths happening around, why was not there a single crowd panicking or complaining about the putrid dead body stench in the air until the climax where the killers made it really really clear that all of the murders are real? Is this movie saying we're that desensitized to violence that we can't tell what's real and not in front of our eyes? Maybe one or two deaths, yeah, but tens? Hundreds? Hell, I don't know how six mortal killers (or five since one of them survived a friggin shotgun to the head) piled up hundreds of dead folks in just a couple of hours but if said folks were braindead enough not to fully grasp the notion of a rotting human carcass next to them to begin with then I guess in Darwin's theory, these dead guys have their untimely demise coming.

So, paperthin concept, multiple plotholes and misleading marketing aside, is there anything I enjoyed out of this overkill of a movie still? Welp, surprisingly enough, yeah; it's not much, but the killing sprees were so overblown with dead bodies that it really does live up to its title as a Funhouse Massacre with a gore count and latex work to boot, and I can't help but just roll with it once in a while. With the movie's cheesy and partially comic tone, it also eventually puts a good use to the one note yet cheeky characterization of its cast (both heroes and villains) by having the last third of the movie involve our quirky gang of misfits fighting against the killers, some hitting it harder and funnier than the rest. It's just kinda disappointing that it took this long to have the supposed protagonist do something worthwhile but at least the plot got a little more workable by then and the movie passable despite it's many flaws.

So, yes, The Funhouse Massacre may fail as an intense and well-oiled scare flick, but as a popcorn movie that you can watch and enjoy without stressing out a brain cell or two, it might just work. While I still have some nitpicks with its advertisements as slasher movie, I can imagine worse gimmicks this movie's marketing could have done like, I dunno, have Robert "Freddy Krueger" Englund pose for the film's poster and box cover in a manner that he might be the head villain or something when in reality, he's gets killed early in the movie by one of the maniacs. Yeah, this movie was decent enough not to do tha-