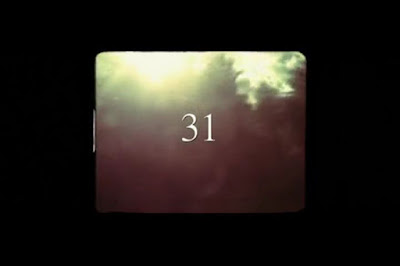 After ruining a classic slasher franchise with Halloween II back at 2009 (and no, I will not include his 2007 Halloween remake. I happen to like that one), as well as further mucking up his horror prowess with an artsy-fartsy witch mumbo-jumbo called The Lords of Salem back at 2012, I honestly cared less about rock star-turned-horror director Rob Zombie until it was announced that he was working on another movie simply called 31 a few years ago. Intrigued yet skeptical for two obvious reasons, I decided to give him another shot and see this film once it comes out, keeping my expectations low while hoping I wouldn't be making a mistake worth gouging my eyes and tongue out. And holy effin hell, I am glad I did see it coz Mr. Zombie may finally have his mojo back! Greasy, vulgar, obscene and offensive mojo but a welcome mojo nonetheless!

Taking place in 1976 Halloween, "31" follows a group of rowdy and dirty carnies as they drive across US of Nowhere for another gig only to be cornered by a group of masked men later that night and have all but five of them murdered.

Further going down the shit hole, it turns out that the lucky ones died first when the surviving thespians are thrown into a hellish game of "31", where they have to survive twelve hours inside a dilapidated maze while being stalked by a group of maniacal and homicidal clowns known as the "Heads", all for the amusement and wagers of a trio of deranged individuals in powdered wigs.

So, to make a long story short, 31 is The Running Man (1987) (or $LA$HER$ (2001) for you hardcore slasher fans) only grittier, louder and gorier with it's strong use of hicksploitation and slasher movie elements around a pretty basic a horror survival plot. This being said, expect this movie to be low on the cranial matter and high on swear-heavy and degrading scripts, chunky body parts and blood flying everywhere, and technically a repetitive stalk-and-kill direction that has our five protagonists fending off a slasher killer or two which also has some interesting turns once in a while.

Obviously, not everyone's going to dive in and swim well with this no-brainer approach and some may even see this as a step down from his otherwise more memorable outings such as the ever infamous The Devil's Rejects. However, I like to see 31 as a throwback to Rob Zombie's wilder and chaotic direction style that debuted from his first feature flick House of 1000 Corpses  which, as most of Rob Zombie's works as well, has its occasions of blurring the lines between acceptable and disturbing by giving a livelier interpretation of its villains through the use of shock value and warped humor,  in contrast to the cliched portrayal of its teenage protagonists.

Here in 31, the direction takes a slight nod to the more modern Rob Zombie movies as while we are meant to root for the five kidnapped victims to escape unharmed, their bland and robust introduction mostly consisting innuendo-filled conversations of weed smoking and sex jokes made them the least approachable faces to grace our screens.This only lasted for the first third of the film before they are thinned down in number and forced to play a game of survival and savagery against a colorful set of villains, most (if not all) having a considerably stronger screen presence than the victims with their outlandish personality and gritty get-ups, as well as even sounding as human as the people they are going to kill. This approach allows the film to focus more on the gory action and shock entertainment, without a doubt cementing the movie as a title meant to be enjoyed with a billion braincells napping or dead. Again, not everyone's cup of spiked coffee, but it's not without it's fans and daring viewers willing to try out.

In terms of casts, we got the now familiar Sheri Moon Zombie playing (yet again) lead female Charly, who quickly discovers her inner bloodlust once the gore games begin, as well as Malcolm McDowell playing "Father Murder", one of the mysterious trio who enjoys tormenting the unwilling players psychologically and betting on the odds of their survival. Between these two, Sherri is okay-ish on her role but I can't get enough of McDowell's outrageous character and his optimism for the carnage unfolding. The cast making up the "players" in the game 31, mainly Meg Foster, Jeff Daniel Phillips,  Lawrence Hilton-Jacobs and Kevin Jackson, ranges from underused to complicated in terms of each of their character's portrayal and I guess I can say the same for the majority of the actors playing the murderous "Heads" save for two, one of which portrayed by Chilean little actor Pancho Moler, starting carnage with a whopper of a character called "Sick-Head", a face-painted, Spanish speaking little Nazi armed with a pair of deadly daggers. Despite his size, he's notoriously vulgar, intimidating and got the ball rolling quite well with a fair number of stalk-and-stab scenes.

The other "head" is the supposedly best of the bunch, a philosophic psychopath called "Doom-Head" who loves sex, murder and trivias. Rob seems to have an aim to make this character the next big thing as a slasher villain and actor Richard Brake delivers just that, with so much grime in his teeth and glee from all the murders he commits, all the while showing a near-pretentious prowess that may or may not provoke a thought or two, if not striking a nerve. He is the last "head" to show up in the main game (as well as the first "head" seen in the entire film) and I couldn't have it in any other way!

The film looks pretty darn good for a crowd funded production shot for only 20 days, with some splashy gore effects and a few interesting set-pieces, though the unnatural and clunky look of the premise may look cheap for some, but I like to see it as a nostalgic take on practical effects. In totality, 31 is no big masterpiece but it is a passable gory offering from one of horror's wildest musically-inclined directors who you can either love or hate. From my standing, I see a cult classic in the making with this movie and I recommend this for the gore hounds and slasher fans out there!