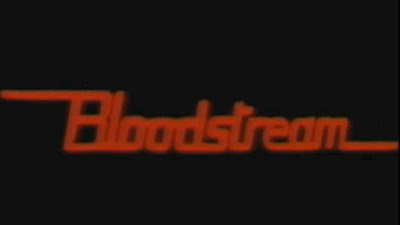 Well now, here's another title I never knew I'll be getting my hands on considering it's rarity! I guess it just goes to show you that a little patience and hard work can get you a long way... Even if what's at the end seems worth only half the travel... 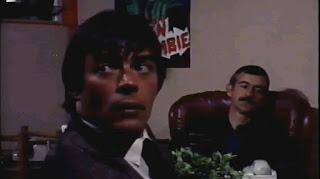 Alistair Bailey wants to be a director and he believes his first feature, a strange concoction of the weird titled "Bloodstream", is a masterpiece of horror. His distributor, William King, disagrees with his notion however, as he sees Bailey's film as a failure of a fright flick, tosses the only copy to a trash bin and berates the poor director on how unscary the film is, all before he fires him on he spot.

Distraught over what just happened, Bailey spends a few days binge-watching horror flicks (and one Mad Max rip-off) until he's secretly notified by King's secretary, Nikki, that her boss actually saved the film and plans on releasing it globally anyway without giving Bailey a share of the royalties. Now driven by revenge, Bailey and Nikki decided to team up and get even with the cheating distributor- by killing his family and friends!

With a super 8MM picture quality, near inaudible audio, hokey-looking (albeit passably bloody) special effects, and a very straight-forward story, it's hard not to imagine all the possible reasons Bloodstream ending up this rare. But, in its defense, its gradually overflowing cheese and the silliness of its story can be good enough reasons for it to be viewed at least once should one ever get their hands on a copy. 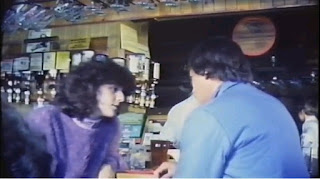 In terms of direction, Bloodstream is one of those movies that takes their time building around the plot before getting on the actual killing spree. For a decent while, it's really nothing more than our central character being glum and numbing the pain away by watching, in turn, the pain of fictional characters on his TV screen until he was made aware of his distributor's scheme and starts a revenge plot with an accomplice who may have something else in her mind than righting a wrong. (I mean, would you really kill someone for just stealing a movie?...Okay, maybe, but have they ever considered the notion of, I dunno, suing?)

From that point into the story, Bloodstream sort of stumbles back and forth from further developing this revenge plot to our supposed anti-hero either being egged into killing his former business associates or just him further watching his shlocky exploitation movies while his accomplice do most of the work. As much as I enjoyed the random movie-within-movie horror snippets, these scenes can get a little too hammy to sit through with their zero-budget parody of popular horror movies (and Mad Max), leading to the story needlessly stopping just to get them out of the way, slowing the pace down. I guess if one will look into it, they can be seen as Bailey's slow descent into obsessing over horror movies which explains his later snuff film project, but production-wise, these seemingly unrelated horror scenes can also just serve as padding to bulk up the movie's relatively thin plot.

Thankfully, whenever the movie does decide to show the development of our leads' revenge plan, these moments can be interesting and the interaction between the two plotters. Though it's not new to have a killer be the brawn behind somebody else's brain (like Jacob Goodnight as he was to his mum in See No Evil, or the Animal Masks as they were to the money-hungry schemers in You're Next (2011)), the shallowness of their motivation to murder off a scheming business-type and his family was just a whole new level of absurdity that I can't help but be amused by this. 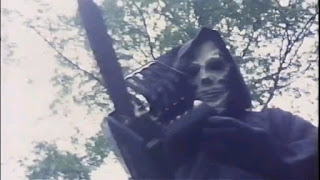 When it comes to the actual slasher parts, they're relatively easy on the eyes and boast a decent kill count that works despite the cheap effects. They even paid tribute to a few murders from another slasher, Happy Birthday To Me (1981), by taking a stab on that film's infamous dumbbell and mouth-kabob scenes. All of this soon leads to a foreseeable finale where the greedy-types are dead and a last minute commentary about media violence were thrown in for reasons that hardly mattered at that point, but commendable for the effort even if it was laughably cheesy.

Overall, despite the many issues Bloodstream seem to have production and story-wise, the movie delivers better than many shot-on-video messes out there and its cult rarity status feels justified at some level. I will admit it's not good enough to be considered a holy grail of low-budget 80s horror, but I was entertained and I am sure those who loves a good bad movie can have a great time or two should they ever have the chance to see this. With hammy horror in every minute and a twisted take on a revenge-slasher type, hunt on your own will and try it if you dare!