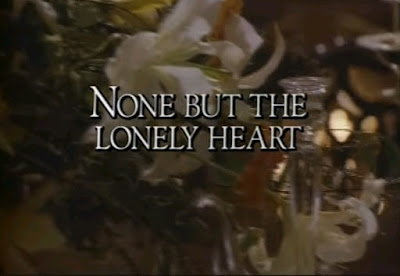 Finding a decent slasher-inspired episode from the ghoulishly delightful series Tales From The Crypt can be tricky as while we do have a few entries that have a little shred of the bodycounting ways (the episode The New Arrival from Season 4 has a scene where we see a murder through a masked POV shot, for example), a good bulk of them did not have enough bodycount or any other slasher tropes to be considered as a bonifide hack-and-slash treat.

Of course, we do get a few pretty close ones: All Through The House from the first season is basically a slasher climax, season 5's Came The Dawn is a backwoods version of Psycho (1960) (spoiler alert?), and now, I welcome season 4's None But The Lonely Heart, which is a hairline away from being a not bodycounter.

In this terrible tale, Howard Prince (Williams) is a gold-digging playboy who marries older women before murdering them and taking their wealth. He have been doing this for a good while now and his lawyer-slash-accomplice suggests quitting as early as possible before people starts to notice. But Prince, feeling a little greedy and positively sure of his biddy-swooning skills, thought otherwise and plans to trick one last bird before the both of them leave the country with their collected goods.

This time, Prince sets his eyes on Effie Gluckman (Sternhagen), a lonely widow who questions his intentions for seeing someone twice his age, only to soon fall for Prince's smooth-talking and heart-broken sob tale of being as lonely as she is and that he is impotent. (I am not kidding) After making the two-backed beast multiple times the night they met, the two soon marries and Prince begins to plot Effie's murder, but it seems somebody else is aware of his little cad. Now suspicious of the people he knows and meet, Prince proceeds to kill off accomplices and strangers, only to discover in the end that he is in a bigger and more twisted drag.

Tom Hanks of the Forrest Gump fame plays the directing hand in this rather riveting episode that honestly packs all the goodness of an actual EC horror comic. The set-up is silly yet probable and its very execution gets weirder and darker the further the story goes, throwing a side of mystery and even a little dose of dark comedy just like they do in the funny papers. The kills are a certain delight for bodycounters as they do come in a wide variety, though the last kill in the episode could have used a little more grue and blood considering what was committing it.

The talents involved are fun bunch, too; Treat Williams plays a cool bastard that both Treats us with a cheesy facade and a sociopathic psychopath who cares very little to the things he do so long as he can get away with it and earn a little cash along the way. Frances Sternhagen is our elderly main gal who managed to bring a lot of charm to her otherwise easily fooled character, getting sillier and likable in a cartoony way the more her relationship with our anti-hero continues. The others were okay on their little screentime, often just there for Treat to kill off moments later. The best one has to be Hank's own cameo as the head of a video dating service, with his geeky glasses and perhaps the best death in the episode!

Any small flaws from this episode would be the odd camera work and a few questionable editing for the sake of style and gimmick, but these did very little to notch an otherwise fun and energetic episode. I always saw the entire Tales from The Crypt series as campfire tales made for a small screen and None But The Lonely Hearts plays all the cards right! A recommended episode!