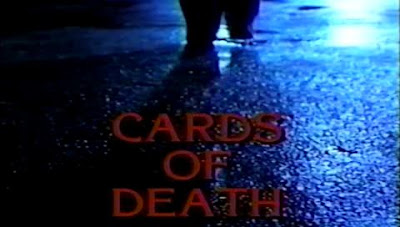 The holy grail of slashers? Hardly.

So, if you don't know anything about Cards of Death, it's production history and/or it's rarity then congratulation! You actually have a more productive life than I do! For realsies! But in case you are a little bit curious about this title, Cards is the first and only feature written and directed by actor Will MacMillan, who horror buffs may remember as David from George A Romero's 1973 The Crazies. It was released in the 80s as a Direct-to-VHS feature exclusive to Japan and the only occasion it was released in the US was around 2014 under Bleeding Skull videos, now as a limited edition VHS. Yes, still as a VHS. It's safe to say that getting a hand on one copy was made slightly easier in recent years, though getting to watch it proved to be more challenging than the hunt itself.

The film opens with a man breaking into a warehouse to skulk around in search of something. Suddenly, some neon lights turn on and the man gets caught by an odd couple who recognize their intruder as local police chief, Captain Twain. Turns out the couple may be running something very illegal, so much so that they slice off the chief's nose with a cheese cutter just to quiet him up, delivering the dismembered sniffer (and other assorted parts) to the police station the next day as both a mockery to the cops' sad attempt to stop them, as well as a warning should these goodie two-shoes ever interfere.

And what exactly is the couple's heinous murder-worthy secret? They run an underground death game where willing players participate in a session of poker, but instead of using the standard cards, they play with tarots. Whoever draws the Death card will be regarded the loser and whoever wins, in addition to earning a fat sum, has 24 hours to kill the loser or else the both of them will bite the big one.

It seems this has been going on for a while recently and this meant a body for the police to find every after game. Made aware of what happened to his father, Billy Twain decides to join the investigation and aids the cops in finding and capturing the maniacs responsible. But with most of their leads ending up dead and the kill count rising, will all of their efforts be for nothing?

Well, if there's one effort that was for nothing, it'll be my search for this movie. I get it, some people will enjoy this, particularly those who have a penchant for the weird, the shlocky and the obscure, but there's so much from Cards that didn't work for me.

The plot, for starters, hardly has a slasher bone in it save, let's say, some influences in the kills. It's bloody, yep, and some people who did the killings were wearing rubber masks for some reason, but that was as far as the slasher elements go and the entirety of the story itself was more of a gory crime thriller with cheese and lots and lots of sleaze. I tried to be invested to the story, I really did, but the whole thing just tries too hard to be this ungodly hybrid of horror and thriller that the execution was just a giant mess thanks to the terrible audio, horrible scripting, terrible pacing that's infested with a whole lot of mind-numbing talking (Again. Terrible. Audio), and the overworked attempts to be as exploitative as possible. (A sex scene underneath a dying woman? Should have been shocking if it wasn't so terribly done and going on too long) Hell, even when the movie ends, it's still a mess! Remember that awful opening song from the movie Killer Party (1986)? Well, in case you didn't, look it up and imagine those singer wasted with ten gallons of whiskey singing the Cards of Death theme song while the ending credits play. My gods, I think. I think all of the horrible things that happened in my life so far flashed before me while that song played come to think about it...

Granted that some of the killings have some decent gore effects in them (read. some) and that there were a few neat plot points thrown in, like that one attempt to build character as a local priest decided to join the game in hopes of paying his church's debt, but I believe this movie could have been better with a sleeker direction, stronger plot development, and/or at least some high-octane action as payoff for all of the time wasted waiting for something, anything worthwhile of my attention to happen. I mean, we already know who's running the games within the first 10 minutes and we are basically just waiting for the cops to wise up and catch them or something, so why not be dumb and messy in a more exciting way?

In fact, the whole idea of a poker game that ends with the death of the loser should have been a neat one. I don't really mind Cards of Death being more cop thriller than dead teenagers so long as story was thrilling and the bloodcount was really worth it, but too much artsy-fartsy exploitation, rushed murders, and cheeky-cheesy acting made this game of death a bore to death. Perhaps I expected too much. Perhaps I let the hype of this being the "Holy Grail of Slashers" get to me. Or perhaps I shouldn't have watched this movie after just finishing the mediocre The Choke (2006) which, by now, didn't seem to be all that bad of a rock'n roll slasher flick. Whatever the reason may be, this movie was not worth the time and effort I made for it. The same time and effort I gave better titles like President's Day (2010), Coda (1987), Cut (2000) or even Bloodstream (1985).

If you would like to see all the hullabaloo that is Cards of Death, then be my guest. If you can grab a copy of this movie, then I pray for your sanity or at least hope that you ripped this off from the internet and didn't waste any good cash on this. I really hope it'll be the latter.