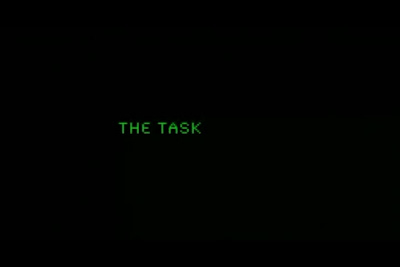 Don't you just hate it when a movie starts out good only to slowly, painfully, and frustratingly devolves into something so underwhelming?

The Task beings with a windowless van kidnapping people and driving them to an abandoned prison. This turns out to be just a ploy when the drivers reveal themselves as nothing more than the host and crew of an upcoming reality TV game show called "The Task" and the kidnapped "victims" are all winners of an audition they made weeks prior.

"The Task" involves the contestants staying inside the prison for 24 hours, all the while doing challenges based on their fears and set around the place's dark history and supposed hauntings. The price is twenty grand for each winning player and the first challenge had one of them reciting a prayer backwards in a mock ritual. Unfortunately for them, the should-be harmless ritual apparently works and the prison's macabre and sadistic warden returns from the grave to start a killing spree.

To be frank, The Task has a solid concept and I really want to like it. There's just so many things that can happen in a game show-gone-wrong but the movie failed to look into all the possible mayhem the plot could have gone to, leaving us with a movie that tries to build up to something with its supposedly creepy scenes and scares, only to resolve with (if not nothing) something so dull and cheated.

With a story mostly resembling a supernatural slasher, I have no problem with each of the teenagers being living caricatures of victim stereotypes such as the camp gay, the wordy brainiac and even the cocky jock-type. This is a near unavoidable flaw that can be worked around by developing some likable interactions between casts, creating great atmosphere and/or at least have a worthwhile killing spree as some sort of payoff, but with the direction either focusing too much on the challenges or what's happening behind the cameras, the characters barely felt like individuals and horror elements were disappointingly limited to a few uninspired murders and cheesy haunted house antics that many of us have possibly seen dozens of times before.

It's disappointing, really, since I do like the materials they have going for the movie's concept, particularly those concerning the evil ghostly warden and the nightmarish things he had done whilst still alive. He may look like just a standard otherworldly slasher villain here but they described him with so many atrocities that one can't help but feel shorthanded when only awesome thing he did is slice a victim's neck like a pig and had the ghosts of his former inmates cannibalize the poor chap. They tried covering up this little flaw with a somewhat acceptable twist in the near end, but seeing how they soon take this back with yet another twist moments later, the final product is still a missed opportunity and an interesting villain barely exposed.

It's like the people behind The Task barely have a clue on what the movie should really be about or how is it going to work. It has all these neat ideas left and right but hardly the execution needed to make all of it fittingly piece together and work as a functioning movie, so much so that the Russian nesting doll-style twists and turns in the end felt wasted as all forms of interest are probably gone by then. Shame. A real shame.

For those who want to see teenagers meet their demise in a reality game show-gone-botched, I suggest My Little Eye if you like it slow yet brooding, or Wrong Turn 2: Dead Ahead if you like it fast and gory. Anything but this sad task of a slasher movie.