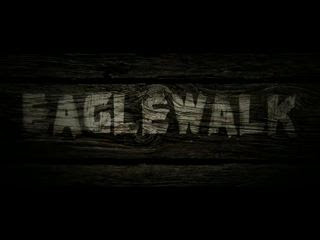 Bigfoot slashers. Why not, am I right?

I mean, Night of the Demon (1980) made it work and we even have a few obscure ones like Demonwarp (1988), Wildman of The Navidad (2008), Dear God No! (2011) and the underrated Exists (2014), so having a hairy ape-giant bodycounting is far from anything new, but it's so rarely tackled that I'm immediately aboard any new slashers doing this.

And joining this little gang of cryptid killers is a 30 minute backwoods goodness simply known as Eaglewalk, which starts with a trio of young campers venturing out of the titular camp one night, hoping to find proof that a legendary creature (which said to be part ape and part man) exists. They planned on luring it out by destroying a sacred totem pole built to honor the beast, but the kids got more than they bargained for when the man-ape goes homicidal on them, leaving two murdered and one, a boy named Elliot, scarred for life.

Ten years later, in 1981, the now defunct Camp Eaglewalk is about to be re-opened and Elliot returns to the same woods, hoping to right any wrongs. Things quickly go deadly when the new counselors suddenly find their director floating dead in the lake and something awakened many moons ago is still skulking around. Soon enough, Elliot and the counselors are now targeted by a vengeful monster angry and bloodthirsty for a killcount.

Within the span of 30 minutes. Eaglewalk can be best described as a "compressed" take on a campsite horror flick, featuring everything you can expect from a backwoods slasher such as sexually active teenagers and supposed campfire tales that turn out to be true. The plot is pretty much your standard "fun times-turned-deadly" type as the arrival of an unexpected and dangerous creature starts to make corpses out of the unsuspecting teenage victims, but it somehow found the time to build around the important players, giving some worth to the inevitable bodycounting.

This is a good practice and I am thankful that it comes with the deaths of the few disposable characters, which teasingly gets better with each kill. Some of these killings also seem to pay tribute to other backwoods slasher, mainly Madman (1982), Friday the 13th Part VII: New Blood and, yes, even Night of the Demon. I'm further impressed on how intimidating they made the cryptid here, towering over its victims and appearing to look best obscured in the shadows, which this film did quite good until the last act, where we get a good brightened look at the monster and, well, let's just say it was scarier underneath all that shade.

In fact, the final third of Eaglewalk should have been great; we have your classic final victim outrunning and outwitting the monster, complete with a nice set-piece involving Elliot hiding under cabin beds while the monster starts throwing them up in search of him. It soon dwindles down to the inevitable last stand between him and the man-ape but the way it was resolved felt a tad rushed, leaving me with a lot of unanswered plot holes and questions. Thank the stars that the overall short is still a rather fine slasher flick with a decent creature-feature sensibilities, so this rather weak resolution didn't really taint the cryptid goodness that much.

A monster-slasher hybrid with more pros than cons, I give Eaglewalk two thumbs up and a honorary place on my growing number of good bigfoot bodycounters. Here's hoping for more in the future and for you to try this simple yet fun backwoods horror dish.

Bodycount:
2 boys mangled offcamera
1 male body found floating on a lake
1 male killed offcamera
1 female clawed to death
1 male bearhugged to death
1 female swung against a tree, stomped
1 creature stabbed on the chest with a broken oar
Total: 8
Posted by Kaijinu at 9:36 AM