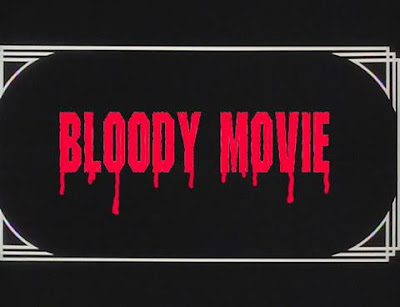 
In this obscure yet fun late 80s offering, the estate belonging to one silent film star Lance Haywood has been purchased and scheduled to be torn down soon. The problem with this, however, is that someone donning Haywood's old costumes isn't too happy with folks messing around the dilapidated estate and made it his mission to kill off those who dares to trespass, starting with two pesky business men!

Elsewhere, a group of teenagers and a random biker couple also heard the news regarding the Haywood estate and thought it will be a great idea to visit it before the demolition team destroys it. The teens are in it for some estranged Hollywood history, the punks are in it for a chance to steal something valuable, somewhere between the line they just wanted to party, drink, and have lots of sex. This obviously isn't going to do well for the costumed killer, thus inevitably leading to a bloodbath none of the homewreckers expected.

An interesting fact about this movie was that it never really had a proper release until recently, making it a slight rarity for a while wherein the only chances of seeing it were either be one of the lucky few screeners, or via VHS-transfer bootlegged copies. Reasons for the obscurity vary from unlicensed use of old film footage, to complications concerning alleged mob money used to fund the production. One thing is certain; this is a pretty decent movie!

Plot isn't relatively new or creative but its execution have energy and the right kind of cheesy imagery to make it a fairly fun fright flick. The biggest sell here would be the killer's own gimmick of switching from one costume to another, from Robin Hood to a knight in full armor, all inspired by the in-universe movies starring the mysterious Lance Haywood. The killer, then, utilizes the theme of whatever costume they are donning for their murders, which meant variety comes plentiful on the bodycount department, all blessed with delicious looking gore and blood works, and further quirked with clips from old black-and-white films that, again, relates with the costume. It's a cheesy concept, one that actually raises some questions concerning the villain's true nature (how exactly do they change costumes so quickly? Or manage to, of all things.) but it is fittingly well-handled here.

The casts are an okay set. Still no more than your classic victim bunch, I somehow found them endearing as you can tell from their portrayal that the actors were really having fun. Genre name Cameron Mitchell even appeared as a cameo around the odd third act, only to be murdered off and probably walking straight home with his pay after his character bit the dust, plus we get to see Michelle Bauer's sexy nakedness (again) so that's an additional point for T&A.

Perhaps the only complain I have with this movie would the the aforementioned odd third act which, personally, felt unnecessary and too mean-spirited. It mostly involves the surviving teenagers being stalked and attacked by our believed-to-be-dead villain; before that, Bloody Movie was a B-grade cheese flick that you can enjoy without feeling all too bad for the dead and dying, but once the killer (and his victim) starts to monologue Shakespeare's Othello; Act 5, Scene 2, slay all who survived so far and simply just end there, it didn't fit the tone too well, overcooking the cheese and finding myself wishing they could have just gone with the basic "late 80s nerdy teen couple survives" ending.

The good thing, however, is that as much as how off-the-wall delirious that ending was, it did very little to taint the 80s slasher goodness Bloody Movie is, as a film surely and should be enjoyed by fans. It's not a perfect, but it tried a lot of gimmicks and chances are some of them are bound to cater to a viewer's taste. If you do get a chance to see this flick, take it and see it for yourself!

Bodycount:
1 male tied between a tree and a car, torn in half
1 male ran through with a spear
1 male hacked on the head with a hook
1 male shot to death with arrows
1 female beheaded with a scimitar
1 female falls into a spiked pit
1 female falls down a flight of stairs
1 male hacked to death with a battle axe
1 male had his neck broken
1 male thrown through a window, lands on a spiked fence
1 male hanged with a noose
1 female strangled to death
Total: 12
Posted by Kaijinu at 5:09 PM