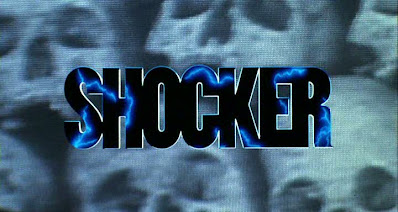 First of all, yes. I gave this horrendous movie four stars. It's no joke, this is how much I love this movie and how much I found it entertaining.

Made under a low-budget and shot in a matter of 10 weeks, Wes Craven's oddity of an effort is an attempt to create a new slasher franchise to cash in which, sadly, did not succeed due to the film bombing on the ratings. Of course, this is bound to happen from the wrong audience, but for the right mindset and taste, Shocker was and still is a whole lot of hokey fun!

Jonathan is a football star at a local highschool raised by a foster family, loved by his team mates like a brother, and is in a stable relationship with his girlfriend, Alison. But for some unexplained reason, he suddenly gained the ability to dream and materialize in places where an elusive family-killing TV repair man named Horace Pinker is at, the first among these encounters involving his foster mum and siblings falling victim to Pinker.

Upon waking up, Johnathan is informed by his lieutenant father of the killings; when he tries to explain that he saw the whole thing in a dream, he was understandably scuffed off by his father until he vividly described the murders as well as vital clues to the identity of the killer. Seeing that lead is a lead no matter how crazy it sounds, his father let him tag along during a raid at a local TV repair place where Horace eludes them and kills his way into escaping, now knowing that his identity is jeopardized by Jonathan's sudden gift.

As an attempt to taunt and warn the footballer, Pinker murders Alison, leaving Jonathan completely distraught and hellbent on exacting revenge on him. After another attempt to locate him by dream, Jonathan, along with a few friends and his father's squadron of cops, finally corners Pinker and have him executed via electric chair.

Unfortunately, Pinker had another trick up his sleeve; not only is he crazy, knife-happy and limp on a leg, but he also practices black magic. So before his execution, he made a bargain with the Devil (or a TV demon for all I know) to have him come back as pure sentient electricity, with the ability to surge through bodies into possessing them, travel by air waves, and simply bend reality via TV.

Now with an executed serial slasher stalking and hunting him in bodies that may or may not be possessed, Jonathan is soon forced to brave it all and battle Pinker in the end with wits, channel surfing, and the power of love. I kid you not!

With a weak script, cutout characters that are obviously influenced by his other films (albeit more stereotyped this time around), and a story that's as crazy as a schizophrenic loon on drugs, we can tell Mr. Craven here was on a desperate move to gain something for himself, which reminds me of the same craziness he attempted back in 1985 which resulted to the slasher The Hills Have Eyes Part II. Much like that film, Shocker heavily relies on cheese to entertain the masses and like the aforementioned slasher sequel, this film somehow found a way to make it all fit in the right places and make it work; granted that the acting is a questionable case and the plot is as convoluted as it tries to do a lot of things in a matter of 100 minutes, the film thrives on its own silliness and gave us strangeness involving limp killers somehow overpowering families into massacring them, the love represented in a victim's necklace is enough to weaken and drive out a now demonic serial killer, TV remotes as weapons, or the fact that no one ever finds a rusty old TV Repair van as suspicious, among many things.

The pacing is quick, with the first third being the most slasher-esque in terms of bodycounting, before slowly shifting to a stab-happy sci-fright flick with over-the-top effects and situations that's just simply fun to poke and laugh at. The reek of 80s air is everywhere from bad hair to awesome heavy metal sountrack. (Dudes of Wrath were gods for their song Shocker, which is also this film's opening tune) And then there's Mitch Pileggi as Mr. Pinker himself; good God, for a film with weak writing, Pileggi's crazy performance as Pinker instantly made the character an anti-hero for me! Not as big as Freddy but with the proper story and finance, he could have been!

Perhaps I'm giving Shocker a lot of praise for sentimental value here; I first saw this movie while I was at my second year in college and I was stricken with Dengue. I had this film downloaded in my (late) laptop and I strangely found the film comforting. And just to make sure it wasn't the fever or the drugs talking, I decided to watch it again weeks after I was cured and released, and yet I still find it entertaining. I dunno, perhaps it really is just a matter of taste that gave Shocker an audience; it is not for everyone but I found myself under the wing of those who sees this as a cinematic failure that's work loving and respecting for the effort and this is definitely something I am proud to live with!

Should you be on it for the cheese or just to see how bad/good it is, Shocker certainly needs to be seen to be believed!