We all can agree that all of us were cyber-bullied at one point in our lives; may it be a hateful comment that led to a tirade of humiliation, or some troll's attempt to ruin someone else's life, we all can agree that this is a serious problem that is affecting children (and adults) differently. Unfriended is a "cyber-slasher" that took this theme in heart and gave us a simple plot revolving six friends facing a seemingly unstoppable presence.

Precisely a year since their classmate Laura Barnes committed suicide due to the humiliation she received from a raunchy Youtube video, token couple Blaire and Mitch was supposed to have a fun night chatting with each other and their friends online via Skype, only to discover that a random user had also logged in to their session. The user, "Billie", somehow hacked into Laura's account and begins to harass the gang with photos and videos taken from the night Laura's video was recorded; things go for the weird when all the usual features of each site they visit start to go haywire and Billie appears to have full control over each of these webpages. 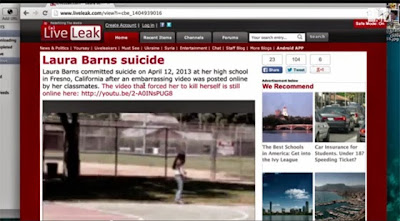 When the hacker threatens the gang that it'll kill them if they hang up, it all turns deadly when, one by one, they fall victim to an unstoppable force that possesses them into killing themselves if they don't comply or lose to one of Billie's games. Friends are forced to confront and reveal their own secrets, leading them to go at each other's throats, all the while dying a horrific death. In the end, who will be left standing and what fate awaits them, courtesy of this "Billie"?

On a hindsight, Unfriended could have been another found-footage slasher movie with a cyberspace backdrop (I say "another" cuz we already have one last year, a far better entry known as The Den) but thanks to its twisted story and interesting premise, it still is an entertaining time-waster that honestly worked better as a video release. 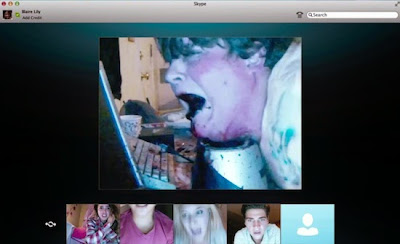 The acting from the cast is the film's greatest achievement since everything is supposedly happening live via video chat. We see them panic with great effect, which is delightfully well orchestrated seeing that the situation they are supposed to be in is everything but in their control. Scares are limited to loud jumps at the end of each creepy build-up and while the kills are a bloody nice bunch ranging from a classic gun kill to a gory blender murder, much of the film's most intense scenes involve the psychological torment our cyberbullies are subjected to. I never played the game "Never Have I Ever" but seeing how it works in this film, I'm not sure I wanna play it whenever I have my drinks.

Perhaps the only flaw here is that the plot is partially predictable; it is simply another revenge-driven slasher with a cyber twist and a supernatural influence that increasingly became obvious as the film continues. In fact, one of the the film's original title, "Cybernatural", was a dead giveaway to this before the producers eventually settled with a more ambiguous "Unfriended", but seeing how the cast had been opening up webpages involving Facebook hauntings early into the film, the element of surprise was reduced to a red herring that didn't work too well. 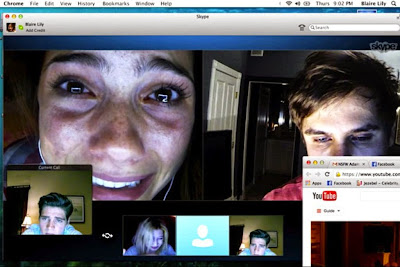 Still, seeing these unfortunate souls get picked off one by one by a paranormal presence in revenge for being a-holes and hypocrites never gets tiring. It's a slasher, yes, but a fun and partially creative take to the classic stalk-and-kill if I may say so myself. If only we get to see some more blood and guts, and some more active scenes (like, maybe, the presence can pick up a webcam and stalk their victims and stuff?), I would have given this film a higher rating but, hopefully, the talks regarding this film's sequels would do just that. For now, Never Have I Ever enjoyed this film!

Bodycount:
1 female shot herself with a gun
1 female seen dead, implied bleach ingestion
1 male had his throat shredded under a live broken blender
1 male shot on the face
1 female gets an iron curler shoved down her throat
1 male gets a kitchen knife to the eye
1 female killed, method unknown
Total: 7