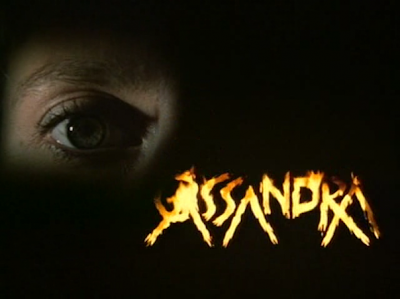 Ozploitation slashers are awfully little in numbers but most of the outcomes are arguably quite favorable; the best examples would be the amazing Wolf Creek franchise, as well as the evil genius-themed Dead Kids (1981) (AKA Strange Behavior), the theatre-motif Stagefright (1980), the made for TV Coda (1987) and the Post-90s teen kill Cut.

Now, we will be reviewing an exceptionally rare Cassandra, a gothic thriller that literally starts with a bang as we watch an apparent suicide-by-shotgun of a woman while a creepy boy coaxes her to "do it". We soon see that this is a dream a  teenager named Cassandra have been constantly getting to the point she wonders if this is a repressed memory from her childhood. Whenever she shares this with her parents, they simply brush this off even if they later hinted with each other that they may know a thing or two. Nevertheless, all are bound for the worse when Cassandra discovers her father, a photographer, was having an affair and probably impregnated one of his models and soon escalates further when said model was killed later the following night.

The cops turn up and started questioning everybody who could be involved but stranger things are at play when we find out that Cassandra saw the murder through an unexplained psychic link with the killer. Now it's up to her to figure out what's really going on and uncover the horrible truth of her past, in an attempt to stop the killer before they strike again.

What I really love about Cassandra is that it has style; take for granted that the story isn't all that amazing, even more if you could take the time to notice the number of slasher influences it had to work with, the execution for the most parts are impressive nonetheless and I like the way they utilize heavy editing to create an atmospheric movie. Colored lenses and wild camera angles expresses varying tones befitting a particular scene, often using the dream-like take again and again that it's almost supernatural, and a practical use of landscape shots to give some sort of isolated feeling which kinda suits the situation our lead ends up being in as she goes on to discover her dark past alone.

Sadly, this film isn't perfect; other downs that a viewer might go through apart from the unoriginal story is that the performances are varying save Tessa Humphies who did an fine job as our titular character. The others are quite questionable in regards to their talent but thankfully, the atmosphere of the film lessens these blows even if the cheesiness of their parts reeks from time to time. I also have to point out the soap-opera subplots were rarely effective and it kinda dragged the film to a snail pace in the middle before catching up once more in the last act. Until then, we get a few murders, not entirely exceptional save a cool looking beheading, but since the movie is story-driven, I can overlook the lack of blood in favor of stylistics.

You could call it an art film in the same likeness of other slasher titles like Spain's Anguish (1987) and the British Thriller/bodycounter hybrid White of The Eye (1987) with its "style over substance characteristics", something that may have put Cassandra in the obscurities in the first place but let not this issue hinder you from seeing this rare gem as for the right audience, this can be a classy trash well deserved to be enjoyed!

Bodycount:
1 female shot her face off with a shotgun
1 female knifed on the neck
1 male stabbed and decapitated with a shovel
1 male stabbed offscreen and bled to death
1 male repeatedly shot and set on fire
Total: 5
Posted by Kaijinu at 6:44 PM