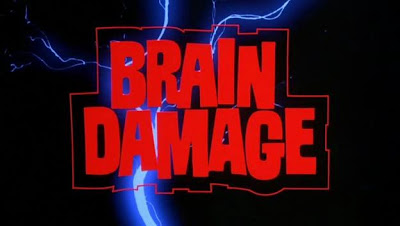 Are we to consider a movie revolving around an alien brain-eater that looks like a talking turd a slasher? Well, even in my book I'm questioning the credibility of this film to be reviewed here but nevertheless, said alien is sentient enough to know what he is doing and that's a fitting factor to a classic horror killer so, what the heck!? Least the little guy knows how to give us a splashing good time!

Written and directed by the obscure body horror aficionado Frank Henenlotter (of the Basket Case trilogy), Brain Damage starts inside a New York apartment where a middle age couple gleefully prepares some fresh animal brains for someone-or something- named Aylmer. However, they discover that whatever's supposed to be feeding on these brains has escaped their apartment, putting the couple on a storm of a fit, thrashing their place as they search for it.

One floor below them lies Brian, a young man who just recently let go of his date since he's feeling a little under the weather. By the time he is all alone in his apartment, he suddenly goes through an acid trip that sort of improved his condition and soon discovers that Aylmer, a smooth talking, John Zacherle-voiced alien slug, has chosen as his new companion and injected him on the nape with a highly-addictive blue juice that heightened Brian's senses. Now hooked on the juice, Brian willingly lets Aylmer hang around and inject his strange liquid again before storming out into the streets, experiencing his own personal the light and sound show.

But all is not without its price; Aylmer eats brains to survive and the fresher it is, the better. And with Brian's addiction for the juice taking over his life, he now has no choice but to provide this alien his much preferred food source in exchange for a fix.

Not much of a slasher channeling the likes of Friday the 13th (1980) or Halloween (1978), Brain Damage is a horror film morality tale showing the dangers of drug use and addiction. Aylmer's first conversation with Brian hints this theme pretty early as the slug's inviting voice and promises of a worry-free life without any form of drawback sounded too good to be true, and this further escalates to a full parallel when Brian tries to withdraw from the juice, only for him to end up so distressed and twitchy that he started to see things and grows weak, physically, mentally and emotionally. It's really uneasy and the comparison works so well, something I find very impressive coming from a B-Flick.

On that note, the great thing about this film is that it is not that preachy with the subject and it doesn't forget that it is still a cheesy horror movie; gore is delightfully red in true Henenlotter fashion, mixed in with a good amount of weirdness and sexual undertones like that one phallic kill that becomes so memorable for its unusual and unexpected nature. The city is yet again shown to be the perfect backdrop for a plot revolving around unhealthy addiction, a similar taste done for the first Basket Case film and his horror-comedy Frankenhooker. Acting is variable, which is uncommon for low budget films like this but Rick Hearst certainly did well on portraying our troubled addict, showing a range of emotions and acting from the silliest to the deeply unsettling. Of course, there's also the movie's main attraction, Aylmer, portrayed as an animatronic puppet with an impressive design and mechanism with Zacherle's voice acting that gave this creature the life and (infamous) fame he is known for around the hardcore horror community, a quite likable character of flair despite the threat that he poses once we accept his little offer.

Perhaps the director's best horror movie by my experience and enjoyment, coming from the fact that with so little budget, he managed to pull off something this weird yet complexly deep, Brain Damage is a must see and own for not only slasher addicts who are open to accept the more curious types of maniacs out there, but also horror fanatics in general. Nothing does a good scare and a few laughs than this 80s gem, especially if you're the clean type!