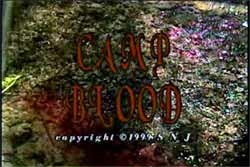 No, we are not gonna talk about Friday the 13th's Camp Crystal Lake's nickname here. Instead, we're gonna look into another killer-in-the-woods type with a low budget, bad acting and a murderer in a suit that really stands out from a backwoods slasher. Seriously, why the heck is he wearing a clown mask? That ain't outdoors-esque!

Well, whatever gimmick this maniac have in mind, it's sure worked enough to gain campfire boogeyman status as four campers and their butch lesbian guide gets a fair warning from a doomsayer they meet along the way, claiming the "legendary" killer clown is real. Right, we've been down this road for a couple of times so it's no shock that one of their friends is later found cooked in their bonfire the next morning. How nobody noticed the smell of burnt meat is beyond me but no sooner after they decided to book it for dear life, the infamous clown arrives to make butcheries out of them.

Camp Blood could work as a cheesy fondue of everything you know about slashers (mostly the backwoods type like the obvious inspiration, Friday the 13th) without making much of an effort. The acting is horrible for everybody and the camerawork is amateur at its near fullest, this title might come off as insulting for many (and I completely understand them) but any pros to come out of this mess would be the even pacing and the nostalgia-inducing low quality doing probable goods for the right audience, perhaps with a  "so-bad-it's effin-hilarious" charm.

Though I'm no fan of the film, I do come to appreciate the movie's attempts to be a simple and fun slasher made to entertain trashy folks. Obviously not for just anyone so watch at your own risk! 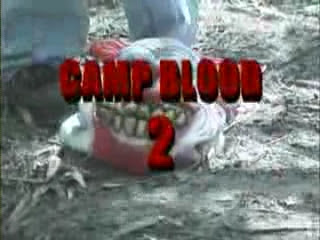 Following up from the unfortunate events of the previous installment, fate of our lone survivor now hangs on her retracing everything that happened prior so she can prove herself completely sane and wasn't responsible for the death of nine victims. All the while, she shares these events with a low-budget director who's planning on doing a movie based on the killings, with a gimmick on using the possible murder suspect as a guide of sorts to make sure this film is as accurate as possible. What they didn't expect is that the clown, or someone donning as the clown, has returned to do more killings, targeting staffs and actors alike.

No means any better but I do saw some improvements; for starters, the story has a nice touch of complexity, straying a bit away from the bare-bone "kids go to the woods then die" set-up to create at least some depth and situation for some of its characters. Of course, this being a cheap direct-to-video concoction, the rest of the casts are one-dimensional, simply there to be meat, and the plot is tainted with enough hamminess and holes to start someone's boiling point.

Still, I could give further points up from the fact that this sequel feels like a parody of low-budget production, stabbing at the cliches, troubles and joys of making a home-made horror film. It's this take on the plot that got me following, but not entirely enjoying, this franchise, hoping to see further improvements in each film.

Gore-wise, Camp Blood 2 didn't shy away from the machete kills and it is bloodier in comparison. The killer still dons the cheap black gear and mask combo, though the clown mold is noticeably different. (Not that it matters anyway) Apart from these pros, there's nothing else to say for the rest except that it's pretty much your average garden-grown SOV horror.

Still lacking any real sense of dread but fluidly paced, Camp Blood 2 is a sequel nobody asked for but exists anyway to satisfy whatever number of fans the first gathered with it's cheapness and cheesy production. Again, not for everyone but if you're willing to waste a good hour and minutes to watch a horror movie set being terrorized by a wanker in a clown mask, be my guest! 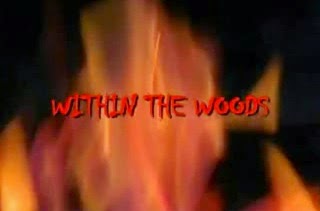 More of a retelling of the first with a new set of characters and a much more fluid modern look, Within The Woods follows a reality show producer who plans to use the legend of the Camp Blood Clown as a motif. And as if his cue was called in, the Clown, or someone donning the clown, pops up to do bodily dismemberment to each and everyone involved in the set. The thing about this is that it took quite a bit before the clown shows up to butcher the contestants (a few deadly casualties did got in the way for an added kill count) and we did have some feeble attempts to deepen the characters, as well as re-telling of the Camp Blood Clown story. (covering events of the two prior entries) Once these kids wake up for the next morning, they discover some of their friends are missing and/or dead, and soon we repeat the run-stalk-kill last third of the first movie with a familiar twist.

So it's nothing more but the same old stuff, Within The woods' only improvement is that it looks a little better, there were some actual plot direction and a better set of talents. It's still bad, but watchable as a campy slasher that, like the first, was made to entertain the simple folks with a standard horror story, some awfully big plot holes and really cheap kills.

Not much else to say, Within The Woods is quite forgettable but a fair swing nevertheless. See it if you want but you're not gonna lose much either if you decided to skip this.