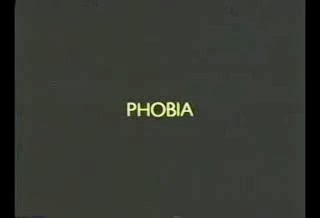 Psychiatirst Dr. Peter Ross is up to something revolutionary in treating phobias. Too bad it's also quite controversial; six inmates are given the opportunity to earn their freedom by participating in Ross' experimental method on curing/facing phobias by showing them recorded simulations of their actual fears through a really big TV screen. How is this revolutionary, or more importantly, help these poor saps is beyond me but problems are abound when these patients began dying one by one, ironically under the nature of their own fears.

By today's standards, this may not be entirely new, significantly since we have better titles with the same gimmick, and, sadly, the steady-yet dull direction of this movie and the lack of any believable reaction (or acting, for that matter) around the cast doesn't do any better in return. Phobia (1980)'s less of a slasher and more of a thriller with an air of (failed) sophistication and a whodunit angle that barely makes you think since the twist is too darn obvious, thus barely making through with a passing grade for my viewing but have to commend some of the scenes for their shred of effective tension. There's a little trail of cheese through out the movie's plot but seeing this is one of the earlier (if not the first) attempts to do a bodycounter revolving around phobias, I can look over some of these cons and appreciate the effort.

Maybe with a better (and more talented) cast, more inventive kills or at least a tenser and livelier approach, we may get something out of this film but on it's own, Phobia (1980) is a viewing for horror completists and/or hardcore slasher fanatics only. Nothing else to note, just see it if you're curious.

Bodycount:
1 female decimated by a bomb
1 male falls to his death
1 female drowned in a tub
1 male crushed in an elevator shaft
1 male found dead from snake bite
1 male shot on the eye
Total: 6
Posted by Kaijinu at 4:11 AM