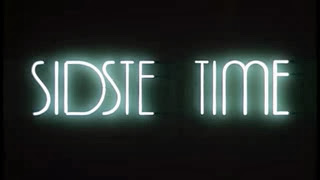 Released just a few years before the teen slasher boom exploded and nearly every country in the world wet their hands in blood for masked maniacs hunting down self-aware victims, Sidste Time is Denmark's own little jab at the sub-genre, pitting seven teenagers in a late night detention in their biology lab, unaware that a killer is on the loose in that very building. 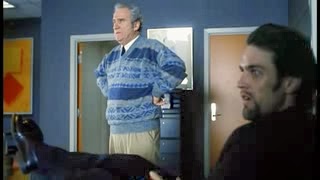 Aware of this situation, however, is one Mickey Holm who covers the event outside of the premises. As the death toll rises one by one, the kids soon find out the horrible truth of their predicament and there might be no way out of it alive!

It's most fitting to describe this movie to a Twilight Zone episode, albeit a very bloody one; while it starts like any other slasher, with teens collected in a ridiculously convenient empty school for reasons equally obscure only to end up brutally snuffed off by a killer, Sidste Time turns to a more haunting twist that defies any known explanation ala Lucio Fulci's The Beyond.

Nightmare logic comes in full force when cryptic TV messages appears in units that aren't even plugged in, tabloid news groups covering a crime scene almost an instant after it happened, and even buildings that lock by itself. There's a level of the supernatural thrown into the mix but much of the horror is more on the psychological, on its way on becoming a thinking man's horror.

But, as I mentioned earlier, it feels like there's no real explanation for the events that unfolded in this film but if one would read in between the lines of the movie's climax, you may get a few choice interpretations of what really happened in this night.

On a technical note, the acting is fair and I do give kudos to the amazing lighting and cinematography.but I feel a tad dry when it comes to the killings. However, I could easily disregard this as a minor setback, knowing most of the energy went more on making a psychedelic and psychological nightmare than a standard bodycounter.

Sidste Time is a movie with a divided audience; you could either appreciate its uniqueness as a slasher or abhor it for this fact alone. I'm not much of a fan of it but if you like something a little stranger for your slasher kicks, give Sidste Time a roll!