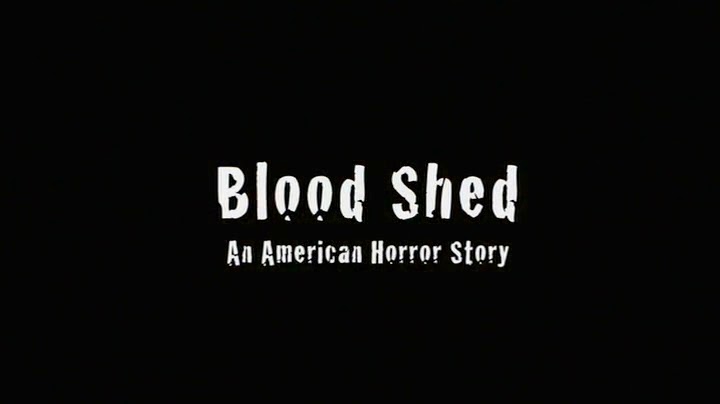 War is something we normally try to avoid as a mean of solution. Those who partake go in normal and come back either in a casket or as a damaged soul, the latter being the case to our loonie in this anti-war propaganda of a slasher movie, making this one of the few horror flicks I've seen that use shell-shock as a modus.

Like most of its kin, Blood Shed is about another group of 20-somethings enjoying a weekend up in the mountains with nothing but each other's company. What they weren't expecting is that their stay will be interrupted by a homicidal war veteran who couldn't let go and move on from his war-torn past. A good hour or so, this seems to be how the story will go but around comes the final act, and all things just go tedious for me.

For one, I can appreciate what this movie is offering; instead of using gimmicky casts and cheesy plot holes, Blood Shed has a serious tone that's relaying a message against war, showing the side effects of training people to fight and kill anyone for the sake of their country. This is quite a big gig for a slasher to tackle, perhaps too big and frankly, I'm not really that interested; politics bore me to death and this movie didn't click right for me despite the good intentions. I guess I'm just the kind of guy whose brain switches off whenever I watch a movie of this sort, hoping for an hour and a half of escapism before I work my arse off the next day.

I also have a few beef with the killer and their killings; as mentioned above, the killer's an old veteran who had gone cold-hearted crazy with the killings that he no longer think or reason straight. He can't find any further meaning to his life so he just functions based on his programmed instinct. This is cool and all in a fictional horror film point of view but the age and physique of this guy is anything but imposing. He had a couple of scenes that would have made him memorable, stalking his victims wearing a George W. Bush latex mask, but these were short-lived as the rest of the film have him face-naked and spatting out his flashbacks like the old shell-shocked coot that he is. Scary? Maybe, but it's leaning to "eye-rollingly tiresome". The least the producers can do is juice up the killings a bit but no, even in that department it's disappointingly dull.

Personal taste aside, Blood Shed is still a respectable slasher in its core that followed everything by the book. I'm positive this is a point up for those who are more forgiving and more open to their hack-and-slashing, especially for those who wanted something smarter roaming around their usual serving of shlock entertainment. I'm not saying this is a movie made for intelligent people but it did tried something different for a change and we can all applaud it for that.

If I want military themed slashers, I think I'll go with either The Prowler (1981) or at least the more popcorn-friendly Severance (2006). This is something for the rest of you curious ones; if you think you can stand watching a killer in his 60s and graying hair stalk and successfully kill teens who could easily knock him over then congratulations, Blood Shed is your date for the evening.