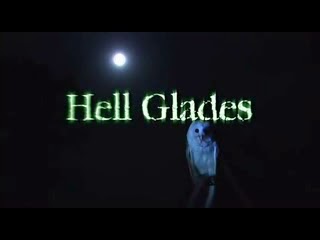 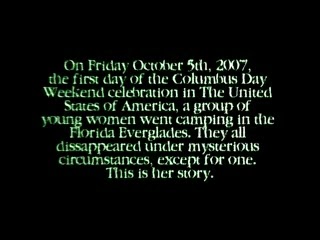 Strange things are abound at a Florida evergreen campsite as some campers are getting brutally hacked to death by a random tomahawk-wielding Native American. Those who survived are taken by him, Coowahchohee, a Seminole indian warrior of legends (at least in his own mind), who sets his eyes on making them his bride. When one couldn't cut it, Coowachohee decided to prey a gang of bikini-clad college girls vacationing at the same evergreens.

Least to say, Hell Glades is a pretty darn honest movie; it's a dumb slasher full of dumb people who're doomed to die at the hands of a disappointingly dumb maniac who we can easily tell to be anything but supernatural (as many characters in this movie (?) seem to believe) seeing his lair is nothing but a trailer parked in the middle of a backwoods opening. The plot is as thin as Japanese paper and littered with so many rushed editing that you can't help but feel rushed, with almost nothing of interest building on its run.

The cheese is high, however, so it goes on without repeating that the movie's corny dialogue and underacting will surely find an audience. The kills wouldn't impress any hardcore slasher fan but if they are open to tomfoolery such as this then it is their funeral.

Currently distributed by Troma as Bikini Swamp Girl Massacre, this uneventful bodycounter leaves an unimpressive mark that smells like a fat guy's sweaty jockstrap. Hell, even the rare yet dull Demon Warrior (1988) is a lot better than this so heed my warning, dear readers: watch in risk of boredom!

1 female corpse found
1 female hacked with a tomahawk
Total: 14
Posted by Kaijinu at 2:06 AM