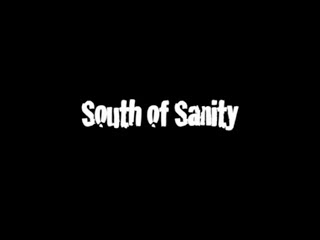 As far as gimmicks come and go, South of Sanity had one thing going and that would be it's dedication to make the premises as realistic as possible.

Shot entirely in Antarctica, the movie deals with a group of researchers who find themselves pitted against an assailant who may be one of their own suffering with too much cabin fever. Characters are introduced, interacted and soon killed, as we watch these hapless victims figure out who's donning the skin mask and try to outlive one another, even if it means turning against each other.

If I could make any comparison to South of Sanity's plot, I would say this is pretty much a slasher version of John Carpenter's The Thing (1982), minus the shape-shifting alien, the tremendous special effects and the gore fountain. In fact, the movie is really dry on the bloodying as the kills are simplified due to cost cuts. This may not sink well for those who were expecting a really bloody bodycount movie, even more is the fact the pacing felt like an old-timer walking it's three-legged dog in front of you, but if you're good enough with sadistic chills that does have its moments, then this is where the film wins.

While special effects involving red-dye corn-syrup isn't the movie's forte, much of the focus and energy are instead put into a workable direction and atmosphere. The barren nature of it's filming location, as well as the fully functioning yet barely crowded set, ticks off the right nerve when it comes to uneasiness, making it one of a few films that effectively brings an isolophobic as help is nowhere to be found and the casts are set to defend themselves in a nearly hopeless situation. (Again, much like Carpenter's The Thing and even the first 30 Days of Night movie)

With a cast full of unknowns, performances are quite good but the audio often muffles their lines into echoes. The killer also have their reveal in the end and give us quite a motive for their killings. Not sure if everybody will buy it but I've been through worse, this being one of the milder ones.

South of Sanity is really nothing but your standard slasher with a real case of the colds, but effective enough in transition to deliver what movies of this sub-genre do best. Not much else to say but that it is watchable for the true hardcore bodycounter so long as they set their visceral expectations low.