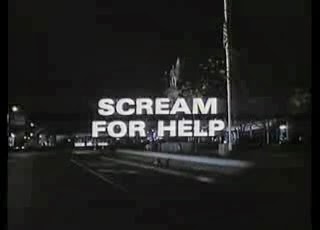 Here's one for (the late) Michael Winner, the director who brought us the cult favorite Death Wish series and this little obscure melting pot of a gem that blends in slasher sensitivities, crime thrillers and teen drama.

When young Christie begins to notice the strangely consistent series of accidents around her, she's pretty sure her stepdad is behind it all. Her mother, you see, is loaded with a handsome amount of inheritance, nothing but the best reason to have her dead.  But with very little evidence to back up her suspicions, she and her friends had no choice but to follow Christie's stepfather around and eventually gets the proof they need. Unfortunately bad dad ain't going down without a fight, and tagging along his own set of murderous friends, he's out to finish what he started.

Not much of a slasher per se but Scream for Help effectively used some of the cliches commonly found in such films and twist it to create some interesting role reversals and a grand taste of cheesiness that's so bad it's funny. Where else can you find a heroine who mourns the death of her friend by having sex with her late buddy's boytoy, or have an incredibly intense scene where Christie chases her dad's car while riding a bicycle? Might as well let this movie be known more for this unintentional funnies as the plot is sadly generic. (Shocking seeing this is written by Tom Fright Night, Class of 1984 Holland.)

Beating The Stepfather (1987) for at least two to three years on the plot, the story similarly tackles the universal fear of an untrustworthy step parent while throwing in some mild home invasion scenario. By then, our heroine turned the tables and shows her creative side by re-staging every murder attempt on her by her stepdad, effectively killing one goon at a time.

It's not for everybody; I do admit the cheap feel of the title does show from it's obscure writing and some questionable talents but as far as trashy B-thrillers go, Scream for Help delivers the goods for the right audience. Gore isn't sky-high and the kill count is a single digit with some of it occuring offcamera, but if you can tolerate a movie that resembles a Hallmark Channel original movie on crack then you might just be the kind of guy who could appreciate this.