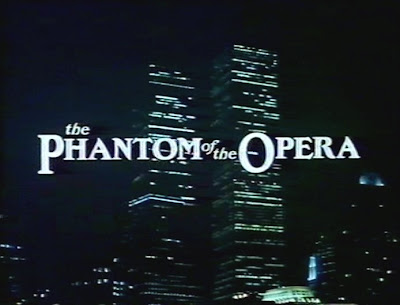 
"Pray for them, who giveth their soul unto Satan"

Rarely heard. Rarely discussed. A shame it was that way. This is really good!

Molding together period drama with slasher film horror, The Phantom of The Opera (1989) stars Jill Schoelen as Christine, a young aspiring opera starlet in modern day New York, somehow finding herself knocked unconscious by a freak accident while trying to sing the unfinished piece Don Juan Triumphant, composed by one Eric Destler AKA The Phantom of the Opera. (played by Robert Englund)

Upon Christine's awakening, the story suddenly shifts to 1880s London; here, she works as a singer in a prestige opera house and, during the night of a big performance, she is given the opportunity to play the lead role as a replacement since prima donna Carlotta was stricken frightened after finding a skinned and murdered man in her closet.

The culprit? The one and only Phantom, a man who sold his soul to the devil in exchange to have his music immortalized in history. The catch, though, is that he'll be disfigured with a rotting disease that's been eating his face away, thus maddening him into murder, flaying some of his victims to steal their skin. He, however, shows a soft side for Christine, who he has been teaching to sing from behind her bedroom walls.

Though Christine's performance that night was well-received and even given a standing ovation by the audience, the house's owner and a visiting reviewer decided to downplay her talent in favor of Carlotta, who is the opera house's main source of publicity. This leads the Phantom to unleash a bloody trail of vengeance and mayhem, eventually meeting up with Christine for the first time, asking her to join him in a bonded (and unbreakable) union with hopes of immortalizing not his, but their music. Whether Christine agrees or not may not be the case here, as the Phantom is purely determined to have her by his side and will murder anyone who dares to get between them.

Despite some strong gore, The Phantom of The Opera is far from just being another slasher; though the story mostly revolves around Schoelen and Englund, the direction of the movie is solid and strong enough to give each main and supporting characters their own fair amount of screen time to properly develop themselves and help the flow of the story, leaving us with a wonderfully performing cast and some depth to their role.

What I find interesting here is that, also unlike most slashers, the killer here has a bit more background and character; though murdering for someone you love isn't entirely new to the sub-genre, what differentiate this film from others is that the Phantom just doesn't kill anybody that comes across him, preferring to simply walk away from trouble unless provoked. He is more open to the streets, looking for wenches and bars to drown his sorrows in. Probably the one, if not the only version of the Phantom that wandered around in public, surgically grafting flayed skin over the ones he is missing so he wouldn't stand out much. If one would take note, most of the murders he committed here were done as an act of exaggerated vengeance to those who questioned his and/or Christine's talent, dispatching them brutally and gleefully in bright red blood. He's crazy, but his strong romantic approach also made him calculating, passionately expressive and very tragic.

Schoelen's role as the sweet and talented Christine Day comes off as a cross between a distressed lover and that of a classic slasher survivor; the character may not have reached the same level of emotional depth as Englund's role, but she is likable and well-acted enough to overlook any shortcomings from scripting. In the end, Schoelen still had the lead role by the neck, giving us a performance quite good even for an exploited version of what could have been a romantic period thriller.

Speak of the devil, another aspect I'm quite fond of from this film is that it's a period horror flick, meaning there's the challenge of authenticity in terms of props and background, something the production team handled pretty good. Thanks to this, the movie itself have some very high class feel to it, though the added elements of the supernatural and very gory murders still grounded this film back as straight horror, despite the lack of teen victims and gratuitous nudity. (one nude woman sleeping and that's it)

Fans of the original novel would see this version retained some of its grittier elements, compared to most of its stage musical portrayals where the titular character is given more plight to the point he's too sympathetic. Not that I have a problem with that, as I, myself, is a fan of the musical, but those portrayals stripped away the very reason why the Phantom was feared to begin with. Nevertheless, I wouldn't say boosting up the kill and blood count here were the answer, but it's a novel idea, one that I came to enjoy fully on its own.

The Phantom of The Opera is one of the better underrated slashers that needs to be seen and experienced. A box office flop may it be, but it's a step up for the sub-genre, and too Englund's horror performance, delivering everything a true gore hound will ask and, in the meantime, something rarely done in bodycount films. Recommended!