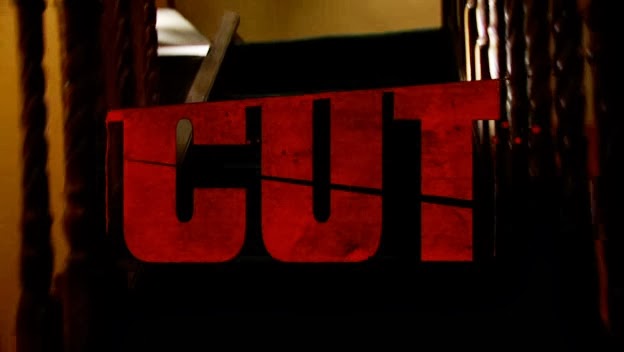 Remember how some time ago we had The Silent House? A movie from Uruguay marketed for its one single take? Well, here's another title that did the same, albeit shorter. Would it top, or would it flop? Let's see:

We have an opening scene involving another take on the urban legend about a babysitter being spooked by a large clown doll in the girl's room, only to discover from the girl's parents that they never bought the girl a man-sized clown doll. Doll turns out to be a deranged killer (which looked awesome, by the way) and just before we get a stab, we get cut off from the action when somebody turned off the telly.

So the opening's a movie withing a movie, and now we'll be treated with the film's theme song, with actual lyrics that involved the singer to peak a high note dramatically, all while we explore the house with a flying shot. As the real movie start, things get off a little dull as five people talked about...stuff (bad audio and accents. A terrible combination) until they begin to notice weird rustling outside their cottage and one of them waking up to find a face painted man looking right at him while he napped. Pizza guy then arrives, probably to heighten the kill count later, and soon enough, they're attacked by a group of face-painted hooligans in a nasty home invasion twist.

Not a lot to say with the movie; Cut's pretty short in its run so majority of the film had these five friends banter about something I'm not sure myself before anything interesting happens. The attack itself never really felt that thrilling since they included villainous monologues for a twist that just came out of nowhere, hence rushing everything to quick-cut tame murders and and a cheap shock ending.

The casts did pretty good on their roles but I've yet to understand what was this film all about, apart from being a sort-of okay home invasion. There's a motive, said during the film's climatic twist by the one who masterminded the attack, but thanks to the movie's bad audio, I never quite caught it. Still, I find the gimmick workable and there are some bad cheese moments that saved this film from total obscurity.

By all means, Cut is still a passable and creative effort that just needed a few tweaks. (Like, maybe, a better opening song?)