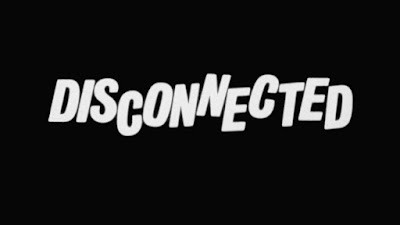 Disconnected (1983)
Rating: **
Starring: Frances Raines, Mark Walker, Carl Koch
A slasher flick done with artsy-fartsy hookums and New Wave riff-raff? Not a cup of tea a lot of people will be willing to partake in and, after finishing Disconnected (1983), I can kinda see why.
It starts with young video store clerk Alicia (Frances Raines) spotting an old man lurking around her home and, out of modest concern, she lets him into her apartment so he can make a phone call while she fetches some fresh tea for them. But just as she returns from the kitchen, the man is nowhere to be seen and Alicia now has an odd tale she's eager to share with her DJ boyfriend, Mike (Carl Koch), and her twin sister, Barbara Ann (also Frances Raines), when they go clubbing later that night.

From here, we see Alicia strongly suspects Mike and Barbara Ann are hooking up behind her back, so much so she gets nightmares about Mike murdering her in cold blood just so he could score with her sister. Thus, when a meek new customer named Franklin (Mark Walker) steps into her video store the next morning and openly admits he's there because he spotted her at the bar the night before, she's willing to give him a chance assuming she and Mike are over. This would have been nothing more than fun escapades for Alicia's love life if it wasn't for the fact that, at home, she's suddenly getting odd and loud obscene calls that are increasingly worsening, as well as the matter that somewhere loose in the city is a homicidal slasher who's slaughtering women.

For the first hour, Disconnected (1983) felt the closest to being a low-budget slasher, albeit reeking of its own brand of oddities and disjointedness; there's certainly a trying effort in its production as seen in the movie's more novel use of editing and camera work, as well as pulling a couple of odd yet curious turns in its direction, though the spotty acting and bizarre scripting speak rather differently regarding to the film's quality and tone. It's veering close to a Z-grade mystery thriller/woman-in-peril plot rather than a competent psycho-drama slasher, though there's an admitted charm to its strangeness of Hawaiian shirt cops and lofi rock montages, plus it still racks up some fair kills with a decent amount of onscreen bloodwork.
The last twenty-some minutes of the movie is when the bodycounting stops and the arthouse surrealism starts; frankly, Alicia gets the Repulsion (1965) treatment wherein she slowly loses her mind and gets tormented by a still ringing telephone and the obscene caller at the other end, thus we watch her wasting herself away out of paranoia and total dementia in her apartment. The whole deal of this finale is basically made up of freeze frames, photographs, previous scenes mixed together recklessly, and loud phone noises that resembles a whiny robot's cry for attention, a jumbled mess that ends with a very ambiguous shot that's supposed to bookend the movie but all it did is leaves us with more questions than answers. 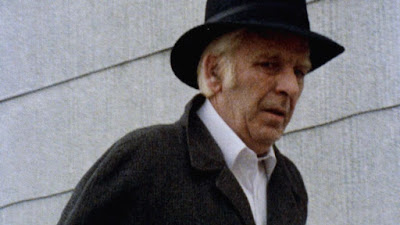 Frankly, I didn't enjoy Disconnected (1983) as a whole; I like bits and pieces that I find either hilarious or groovy (the latter being some of the songs used, courtesy of composer Jon Brion in his 80s band years), but its disunited story is just a tad too desperate for my horror palate, its weirdness too unengaging and balking (and dare I say, disconnected?) to be entertaining. But if you fancy yourself more as a surrealist type of horror fan, then by the grace of your mounted pair of walrus lips, dig in to this obscure heap.
Bodycount:
1 female strangled (dream)
1 female seen slaughtered with a knife
1 female slaughtered with a knife
1 female slaughtered with a knife
1 male shot dead offscreen
Total: 5
Posted by Kaijinu at 10:18 AM