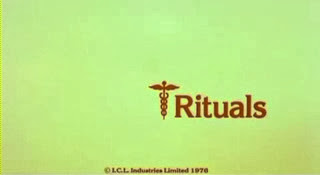 Rituals (Canada, 1977) (AKA "The Creeper")
Rating: ****
Starring: Hal Holbrook, Lawrence Dane, Robin Gammell
While some backwoods slashers tend to set themselves within campgrounds or lakeside vacation homes, a faction of them do brace the very woods itself and have their casts face on not only a psychopathic figure out for blood, but also the unforgiving savagery of steep terrains, rapid waters and forests veiling its threats in shadows at nightfall.

Rituals (1997) is among the early examples of these backwoods "survival slashers", taking very strong cues from the 1972 drama Deliverance as we follow five doctors on their yearly outdoor trip, escaping the busy and stressful city life. It's clear in their banters that they've been friends for a very long while now, their little jabs at each other's professions, ethics and personal life hinted with much good terms and sly warmth that only a good tempered bond can forge, thus this little stroll down to some place called the "Cauldron of The Moon" should have been nothing more than just another hiking and camping trip for these men.

However, in the morning after, they see their first hint that something's amiss when all but one pair of their boots suddenly go missing and, later that evening, someone erected a macabre idol made out of a freshly decapitated deer head on a stake nearby their camp. Assuming these being the work of a prowler (or prowlers) who decided to terrorize them, the men choose hike out while they still can with nothing but rags wrapping their feet, while one of them with the only pair of boots volunteers to venture to a dam he spots in the map to find help. It is then that they become aware of the severity of their predicament when, during a wasp attack from a hurled hive, someone throws one of them to their death, a cold murder that's bound to happen to the rest of them should they stay in the woods any longer...

From here, Rituals (1977) shows how strong its as a survivalist thriller and I will admit with no hesitation, it is verily effective; the further our men go through nature's harshness of heavy rain, crashing waterfalls and sun-scorched trails, the more we see their necessities get taken away and they slowly lose grip on being civil as they start throwing blame around or open old wounds to pick fights, getting reduced into angry babbling messes simply struggling to survive. This direction works so well with the casts' stellar delivery of the movie's superb scripting, bearing little to no ham even if the plot progresses out of its near-realistic wilderness terrors and stalk into straight-up fantastical horror. The film's handful of striking imagery somehow works itself within the plot's theme of losing control and the unpredictable cruelty of nature, swinging in a right amount of dread and suspense upon both its characters and the audience as we path through and observe an environment that is as unforgiving and dangerous as the human threat teased throughout the movie, a strong staple of survivalist horror done right. 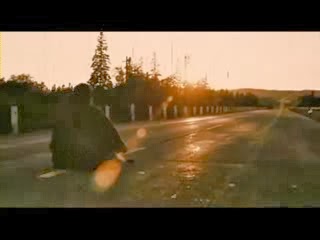 As a slasher in turn, Rituals (1977) may not follow the classic bodycounter rulings given its greater focus on psychological strain and devolution, it does still tackle enough from the sub-genre to be a solid early outing for the backwoods hack 'n slash-type; we do have a body count with a decently fair number, albeit it's brought upon from a more wider variety of causes not limited to the movie's eerily obscured maniac. In fact, the killer's never really completely present on screen until the hour mark where we finally catch a glimpse or two, or see things through their eyes in your typical point-of-view shot. They got through a couple of kills, yes, but they're mostly an observer, biding their time to commit their next kill or let Mother Nature take out these men for them. The motive behind their killings can be a bit loose though, silly even for how both unrelated and specific it is, but I see it as a minor gripe considering how well the rest of the movie works itself around it, especially if it all leads to a harrowingly intense climax, a hauntingly silent reveal to what's behind these deaths and misfortunes, and one last shot that's serene and cathartic at the same time.
An excellent Canuck proto-slasher, this is one title that earned its cult fave status. I strongly recommend any true horror fans to try this out and consider giving this movie a spot for their collection as a minor classic and a hidden gem. A guaranteed genre pleaser!
Bodycount:
1 male thrown down a cliff
1 male strangled to death
1 male had a leg caught on a rusted bear trap, suffers through toxic shock
1 male hacked on the chest with an axe, bled to death
1 male set ablaze
1 male shot with a shotgun
Total: 6
Posted by Kaijinu at 10:46 PM